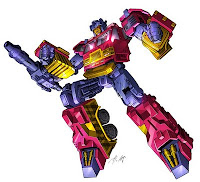 If Harold Camping is to be believed, this weekend marks the beginning of the end of the world. Naturally, I'll have to say something about that, but I want to time my response to the date itself (5/21/11, in case you hadn't heard). That means that this week's feature on a BotCon 2010 exclusive toy — which I've been doing at the end of the week recently — will have to be moved ahead of its time by a little bit, and I can't think of any character it would be more appropriate to show off "ahead of its time" than Autobot Spark. 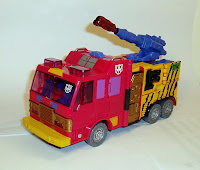 To explain why Spark is so well suited, I perhaps need to do a bit more unpacking of BotCon 2010's particular take on the Generation Two concept, which is actually rather unique. The BotCon version of Generation Two involves a group of Transformers actually created on Earth. Most of these Earth-born Transformers (and a few old-timers who happened to be with them at the crucial moment) were exposed to a special gas that endowed them with special powers. For example, Breakdown can now create concussive sonic blasts, while Clench can create localized fields of intense gravity. Spark was given the special ability to perpetually see just a couple of seconds ahead in time, and to respond to that foreknowledge. 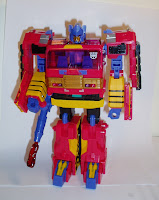 Like Clench, Spark is based off of a toy that was originally exclusive to the European market, and — also like Clench — which was actually released under two different names. Pyro came first, in that unusual period at the end of Generation One where European Transformers toys (there were none in America at the time) sported the Generation Two faction symbols. That same toy was released without change the following year as the Generation Two "Spark," from which the BotCon name "Autobot Spark" is only a slight modification.

The fans who wrote the BotCon 2010 comic (who have also written a number of other well-received stories for the Transformers club, not to mention other works) have a penchant for weaving homages to other pop-culture staples into their stories. One such reference regards Spark (actually, he's called "Pyro" most of the time in the story. Autobot Spark is simply the name that the BotCon folks could legally put on the toy). Spark's time-related powers and personality were apparently written with David Tennant's portrayal of "The Doctor" (from Doctor Who) in mind. Doubly-appropriate given the original toy's European origins.

(No one has suggested this, but I have to admit. If I were told that Spark was an homage to one of the Doctors, I'd have suggested the Colin Baker version. I mean, just look at those colors!)
Posted by Mark Baker-Wright at 12:00 AM