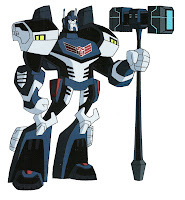 Transformers fans definitely have Animated on their minds these days. Yesterday saw the reveal of Motormaster, the final figure of the five-figure "Stunticon" box set for BotCon 2011, a toy that even before the reveal was generating a huge amount of discussion. I don't actually have the Voyager Optimus Prime toy on which Motormaster is based (although I could grab it for about $12 at Tuesday Morning at the moment if I really wanted to), and I reviewed popular alternative mold-choice Wreck-Gar more than a year ago (ironically, a Twitter "repost" of that entry went live yesterday, entirely by coincidence. I set up that buffer weeks ago, before I knew that Motormaster would be revealed the same day), so I'm instead going to discuss one of the admitted "longshots" that some fans wanted to see made into Motormaster: Animated Ultra Magnus.

As I mentioned when I discussed the Optimus Prime/Megatron "Battle Begins" set, Prime's not the supreme leader of the Autobots in Animated. That honor goes to Ultra Magnus. This is actually quite ironic, because Generation One Ultra Magnus was the consummate soldier, more comfortable following orders than giving them. This is just one of the many ways in which the Animated version departs from the Generation One original that it nonetheless clearly homages. It really does amaze me how many fans complain about such divergences. It's by no means universal, and many, many fans appreciate both the homages and the differences for what they are, but people really can get uptight about this stuff! 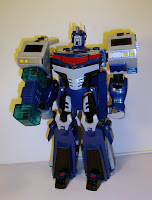 One element of Ultra Magnus' design peculiar to the Animated character is the "Magnus hammer," apparently not only a powerful weapon, but also a symbol of his leadership of the Autobots. And this is by no means the only weapon at Ultra Magnus' disposal, although most of the others are admittedly concealed in the pictures shown here. For images of Ultra Magnus with weapons deployed and ready to go, click here for vehicle mode and here for robot mode.

There are at least two reasons why the suggestion of BotCon Animated Motormaster using this mold was always a longshot. The first is that Fun Publications (the folks who run both BotCon and the Official Transformers Collectors' Club) has never used a figure this large as an exclusive for BotCon (much less in the box set). It would therefore seem unlikely that they could do so now (and still keep prices remotely low enough that people would still pay for the set, which is already quite expensive). The other main reason is the fact that this mold has the "Elite Guard" Autobot logo squarely in the middle of the toy's chest (where it serves as a button that activates lights and voice effects). Although this button/logo could theoretically be remolded, doing so is by no means easy or inexpensive to do, and it simply stood to reason that Fun Publications would find a cheaper way of achieving their goals. Although the debate continues to rage about whether the mold they actually chose was in fact that best choice out of their available options, using the Animated Ultra Magnus mold was simply never a realistic possibility.
Posted by Mark Baker-Wright at 12:00 AM