If you're watching a Transformers cartoon, in pretty much any continuity, and you see a character named Starscream, you have a pretty good idea of what to expect.  Starscream is just one of those character-types that has become a perennial part of any Transformers line.  Much like Optimus Prime and Megatron, you can be fairly certain these days that any new line will have a Starscream character, that he will probably turn into some kind of a jet, and that he will be a back-stabbing schemer seeking to replace Megatron as the Decepticon leader.  Animated Starscream is no exception.

Arguably, if the character of Animated Starscream is a closer homage to the Generation One version than Animated Jazz was to his counterpart, the physical design of Starscream, while still being clearly comparable to the Generation One version in many respects, is more of a departure.  It's a jet, but the style is quite different, with the forward-sweeping wings and darker colors. 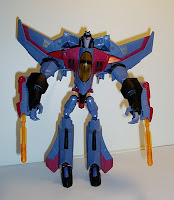 One aspect that Animated Starscream does have in common with his Generation One namesake is that he shares a mold (err... "body style..." in the fiction itself?) with several other characters, who all just use other colors.  One could find toys for "Thundercracker," "Skywarp," and others (in various sizes, but still this basic concept) on the shelves, but the relationship of these other characters to Starscream is radically different than in Generation One.  While the Generation One Seekers were each unique individuals, the Animated versions were all "clones" of Starscream, each one apparently representing some portion of Starscream's own personality, taken in isolation.  These clones weren't even given names within the cartoon itself.  "Thundercracker" (as the toy calls him) places Starscream's ego-maniacal nature on full display, while "Skywarp" is more accurately called "the coward clone."  Other clones include one that is incapable of telling the truth and one who sucks up to everyone around him among still others.  But only Starscream contains all of these personality traits in one robot, a character archetype I'm sure that we haven't seen the last of.