I had originally planned to do this entry immediately after the one for the club version of Punch/Counterpunch. After all, Punch/Counterpunch (henceforth referred to as "P/CP") and Shattered Glass Cyclonus were the two 2010 Transformers Club exclusives, and I had gotten both at the same time.  I had even started the process of taking pictures of the toy before I realized that something was very, very wrong.  Something that required that I postpone this entry for few weeks.

It's kind of a pity, because in most respects, this toy is a better toy than P/CP.  At least, it lacks P/CP's obvious issues.  At least one commenter has suggested that this is because Shattered Glass Cyclonus is less ambitious than P/CP.  No remolded parts, no attempt to engineer a transformation the original mold never intended (Punch's legs).  Just a straight repaint from one color scheme to another.

Shattered Glass Cyclonus borrows his color scheme from Hot Rod/Rodimus Prime, suggesting that the two characters (or, at least, the "regular" universe versions of these two) are somehow counterparts to each other.  I'm sure that more than a few Transformers fans would dispute that comparison (I agree with those who've suggested that Cyclonus is more analogous to Ultra Magnus), but even so, the color scheme translates pretty well. 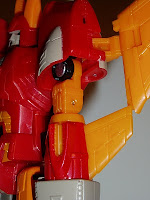 So, what tragedy befell my efforts to feature this toy last month?  While taking pictures for the blog, I discovered that my specimen of Shattered Glass Cyclonus was misassembled!  The arm assembly was such that Cyclonus' elbow would only ever bend the wrong way.  Although I was able to take the toy apart and flip the arm around, I then discovered that the toy would no longer transform into "jet" mode properly!  Unable to fix the problem on my own, I took Fun Publications up on their offer (conveyed to me by FP resident art guy Lanny Latham via Facebook) to send the toy back for a replacement.  Although I was a bit annoyed to have to pay out of my own pocket to have Cyclonus shipped back to FP, I can at least say that they gave me a new (and correctly assembled!) toy without any difficulty.  (You can see a picture of this arm assembled correctly here.  Note how the black part is underneath the orange part, rather than on top of it.)

Shattered Glass Cyclonus really is a pretty neat toy, and exactly the kind of thing that the club does well.  I'm sorry to say that the toy already seems to be sold out from the club store.  If you want one, you're pretty much stuck with eBay.
Posted by Mark Baker-Wright at 12:00 AM