For those of you supporting the Action Master Thundercracker campaign, here is the text of a letter I'm sending to Hasbro to encourage them to consider making this figure.  Feel free to adapt to your own situation. 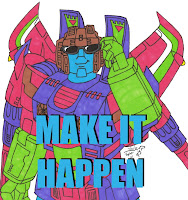 Hasbro, Inc.
Consumer Affairs
P.O. Box 200
Dept. C-847
Pawtucket, RI, 02862-0200.
July 10, 2010
To Whom It May Concern,
I have been a proud collector of Transformers figures for the entire span of the line. Although this does indeed mean that I have long since outgrown the target age group for these toys, I have long been impressed at the efforts Hasbro has made to appeal to Transformers fans of such long-standing. The reissue of, and homages to, many of the toys from what is now known as the "Generation One" era are so numerous that it would take me quite some time to even attempt to list them all. Thank you for these efforts.
I am writing to you now in partial response to news that came out of the recent BotCon in Orlando. Specifically, Fun Publications, the organizers of the convention, informed us that they had hoped to have one of their convention-exclusive toys be an homage to the Action Master Thundercracker originally made in 1991 for several non-US markets, using the mold originally created for "Classics" Starscream in 2006. Unfortunately, they were informed that this would not be possible, as Hasbro was using the mold at the time (presumably for Generations Thrust, which is now hitting the shelves of toy stores everywhere). Although Fun Publications has told fans that "G2 Ramjet" (using the "conehead" version of that same mold) would be made available to members of the official Transformers Collectors Club in 2011, it seems that the Action Master Thundercracker concept is being shelved indefinitely.
I am one of a number of fans who have been suggesting this admittedly quirky homage for several years now, and to learn that it got so close to being produced, only to fail to do so, is more than a little frustrating. As such, we are embarking on a more active campaign to have this figure finally produced. If mass retail is not an option, we're perfectly happy to have the toy produced as an exclusive for some outlet such as Big Bad Toy Store (with whom you've recently worked out a deal to produce the reissue Seacons set) or another online dealer. But we do want an official toy to be produced, as opposed to letting this idea fall to one of the unofficial third-party vendors who may or may not be able to produce a quality product.
So, this letter is an attempt to bring to your attention the fact that there is a fanbase behind this particular concept, and to voice our hope that you will work to find an appropriate venue for making such a figure available to the fans. Also, to help ensure that our campaign makes an impression, we’ll be seeking to “Thunder ‘em with Crackers” by enclosing a cracker with our letters, in hopes that you will see these small tokens, and think “Thundercracker” whenever you do.
Action Master Thundercracker: Make It Happen!
Sincerely,
Mark Baker-Wright
Blog: Transforming Seminarian http://transformingseminarian.blogspot.com
Action Master Thundercracker Campaign - http://transformingseminarian.blogspot.com/2010/07/action-master-colored-thundercracker.html
Posted by Mark Baker-Wright at 12:00 AM