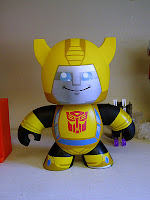 A couple of years ago, some marketing guru at Hasbro thought of a very simple idea: Create a line of simple vinyl/plastic figures.  All figures would use the same basic shape (with one or two minor variations possible), but the images on the figures will resemble any of a number of popular characters.  Thus, the Mighty Muggs were born.

Mighty Muggs quickly became inexplicably popular, and other companies have picked up on the concept in various ways.  Disney theme parks sell "Vinylmation" figures that all use the same Mickey Mouse-inspired shape.  There's a line of DC Comics hero figures called "Blammoids" that are clearly Mighty Muggs-ripoffs.

Anyway, despite the fact that these figures are little more than glorified and overpriced paperweights, Transformers (being one of Hasbro's most profitable franchises) are in on the Mighty Muggs theme, as well.  I picked up this Mighty Muggs figure of Bumblebee more than half a year ago when it was on clearance at Target for less than half of its original price (Target is generally pretty good about clearancing figures that have been on the shelves for too long.  Toys R Us, by contrast, still has full-priced Mighty Muggs Bumblebees on their shelves to this day).  Truth be told, I still feel like I overpaid for the thing.  I guess I just don't understand what they big craze is about.  The horns are the only feature of Bumblebee that are physically any different than practically every other Mighty Muggs toy in existence, and it doesn't really do anything but stand there.  It's not even especially poseable, although I suppose the arms might raise up if I cared enough to bother to try to do so.  Basically, it just sits in my office looking cute.