On a couple of occasions this week, I've called Grimlock a "glory hog."  Although the Dinobots as a team have always been popular (with new homage teams popping up periodically within Transformers history), Grimlock's the only individual character to have gotten consistent attention.  After the original release, there's been a Grimlock Pretender, an Action Master (to be fair, Snarl was an Action Master, too), a Beast Wars toy (arguably the only one to actually be clearly stated as being the same character as the Generation One character sharing the name) an Alternator, a "War Within" Titanium, a Masterpiece toy, and still others.  Given the fact that Grimlock has historically been so popular, it's no surprise that he was one of the characters featured in the 2006 Classics line. 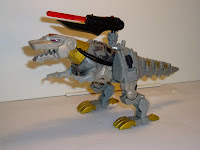 One modern criticism of the original Grimlock toy is that, due to previously common understandings of the Tyrannosaurus Rex, that toy depicts a T-Rex that drags his tail as he walks.  We now know that this depiction is not accurate.  Classics Grimlock fixes that problem handily, and clearly depicts a dinosaur who can run with his tail held high!  Of course, the bayonet blaster on his back probably isn't quite historically accurate.... 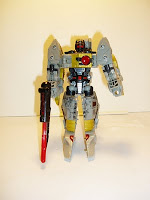 I've come to the opinion that, for most Grimlock toys, the robot mode is an afterthought.  Whereas for most Transformers toys, I display them in robot mode, I almost never take Grimlock out of dinosaur mode.  Perhaps this picture explains why (at least in regard to the Classics toy).  There's something about this mode that just doesn't work for me.  Perhaps it's the way he stands on the jaws of his split-apart dino head.  Maybe it's the lack of discernible knees.  Or the way his shoulders don't quite seem to lock in place.  I'm not sure (it's not like other toys don't have those "flaws"), but it just doesn't seem to work here.  Not shown here is the fact that the dinosaur tail comes off, and can be held as a weapon, but whereas Pretender Grimlock also did something like this, they at least tried to make that tail look like it doubled as a blaster.  I'm not sure what this Grimlock's supposed to do with his tail in his hand!  (If you really want to see what that looks like, here's a picture)
Posted by Mark Baker-Wright at 12:00 AM