My Brother, the Graphics Guru

Ever since my brother Nick was three (if not earlier), we've known that he was talented.  He would draw images of his favorite cartoon character (Goofy) that were well beyond the scribblings one would expect of a toddler.  Later years would add Teenage Mutant Ninja Turtles, Ghostbusters, Mario, Link, the Street Fighter pantheon, and many other pop-culture icons (including, yes, Transformers, as demonstrated by this image I shared a while back).

Nick's also developed some considerable computer skills, and currently works as the tech guru for one of the local auto service chains in the Louisville area.  His job allows him to do some work from home (clearing up a computer glitch over the network, for example), but also requires him to travel around northern Kentucky quite a bit when a computer needs hands-on attention.  It keeps him quite busy. 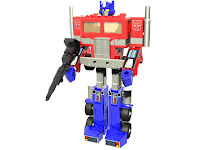 Even so, Nick's artistic skills continue to find outlets.  A few years ago, he put up this web page to showcase a number of 3D models that he created.  Nick is a perfectionist par excellence (there's quite a bit of that in my family!), and these have been done with painstaking attention to detail.  In the case of Transformers like Optimus Prime here, he would actually measure the actual toy to precise levels (and, sometimes, taking the toy apart to make sure that individual pieces were accurately measured) so that the final product would be perfect. 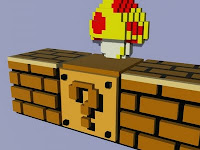 This perfectionist streak extends to video game designs, too.  Take this rendition based on the Super Mario Bros. game, for example.  Even though the original game is (obviously) not in three-dimensions, it was important to Nick to make everything "pixel perfect."  If you were to look at this image from the head-on perspective of the original game, you theoretically shouldn't be able to tell the difference.  Yet this was not directly copied from screen captures or any other part of the original game.  It was all drawn from scratch!  I invite you to check out other examples of Nick's work on his own page.
Posted by Mark Baker-Wright at 12:00 AM