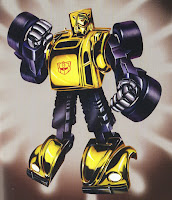 When I first discussed Generation Two several months ago, I mentioned that the first toys to come out in the line were simply old molds given new colors. Bumblebee is one example. Having been one of the most popular characters back in the Generation One era, it's no surprise that Bumblebee was chosen for a new release as the Transformers franchise was attempting to come back from near-death. Several other "Minibots," as toys in Bumblebee's size class were then called, were also re-released. All Generation Two Minibots were "vacuum metalized." That is to say, basically given colored chrome. Ironically, this means that G2 Bumblebee is more gold than Goldbug, the character's second G1 form. 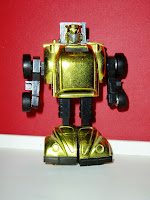 One recurring problem with a lot of toys that have been vacuum metalized is that they tend to chip and flake pretty easily. Oddly enough, I haven't seen this problem occur with the G2 Minibots all that often. I'm not at all sure why they should be immune (and indeed, I don't think that they are), but the Beast Wars Transmetals, which also used this feature a lot, seem to have much more common problems in this regard. 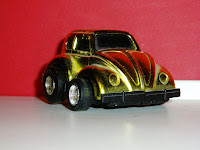 Like pretty much all Bumblebees up until a few years ago, Generation Two Bumblebee turns into a Volkswagen Beetle. This was, of course, back before Hasbro paid so much attention to the need to license vehicle forms from the companies that make the vehicles. And since Volkswagen has apparently decided they want nothing to do with such a "warlike" line as Transformers, it's a form of Bumblebee's that will likely always remain a part of the character's past. I don't suppose anyone's mentioned to Volkswagen that most forms of the character (but not quite all) don't carry a weapon at all.... 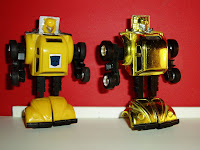 Here's a quick shot of Generation Two Bumblebee alongside the original version. As you can see, the basic "yellow" color scheme has remained intact. The G2 version is just "shiny" now!
Posted by Mark Baker-Wright at 12:00 AM