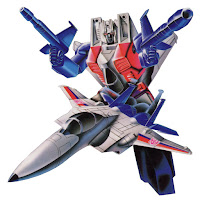 If you go to any Target store right now, and go to the Transformers section, look at the smaller figures. More likely than not, you'll see a number of figures with an "Only at Target" sticker placed on them. If you're extremely lucky, you can go to Wal-Mart and see a similarly-store-specific sticker on a few deluxe sized figures there (most of the current set seem to have sold out, though). Store "exclusives" are an accepted part of the Transformers line these days, and have been for many years now. But back in 1989, when K-Mart released the inner-robots from the Pretender Classics toys without their outer shells, calling these stripped-down toys "Legends," it was the first time ever that a Transformers toy was sold only at single retail chain in the US (and, of course, even that's only in regard to the stripped-down variants, since the Pretender versions were widely available). Since these toys weren't sold with the Pretender shells, they were considerably cheaper than the fully-loaded Pretender versions, and so this was the version of Starscream I picked up. Like Starscream's original form (which I did not possess at the time), this toy changes from robot to a fighter jet, but if you look closely at the pictures of the original Starscream's robot mode, you can see that they changed around a few of the colors a bit, especially in the arms and legs (which are now blue instead of gray). Strangely enough, this color scheme was retained when Starscream became an Action Master the following year (arguably another reason so many fans dislike that toy, although prejudice against Action Masters is already widespread among fans, as I've mentioned before). Although I have, up until now, reviewed only toys I actually purchased when they were originally available in stores, the fact that Legends Starscream is the same toy as the inner robot of the Pretender version creates a unique situation. I picked up the outer shell of Starscream when I attended my first BotCon in 1998 (Anaheim). I then picked up the helmet and large weapon at BotCon 2004 (mere blocks from where I work in Pasadena!). So I actually possess a now-complete Pretender Starscream. It seems kind of stupid to relegate the Pretender toy to a separate review in the future (after I've finished detailing the toys I had "way back when") when I'd only have a tiny bit more to say about the completed form. In fact, I've pretty much covered it with this paragraph and this additional picture, and can consider this review done!
Posted by Mark Baker-Wright at 7:00 AM