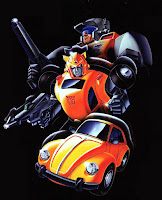 In 1989, the Transformers toyline was entering its sixth year of existence. The cartoon was long gone by now, and the comic was starting to decline. Hasbro had become so reliant on gimmicks that all Transformers available fell into one of two categories: 1) Micromasters, as seen during the past two weeks, and 2) Pretenders. (Actually, there was a lone exception: Powermaster Optimus Prime, but that was released the previous year, anyway)

Pretenders were Transformers that could fit inside of a "shell" of some kind. Basically, you had a large, limited-articulation action figure, which could split open to reveal a small Transformer. For the most part, Pretenders are among the most reviled gimmicks of the entire line. However, I do have a couple in my collection that I'm glad enough to have that I've held onto them all this time. These are known as "Pretender Classics." As with all Pretenders, Bumblebee's "action figure" splits open to reveal the robot inside. But Bumblebee is unique, even among "Classic" Pretenders, in that the robot inside is actually larger than Bumblebee's original toy. Whereas most Pretender robot toys are considered inferior robots who don't even transform into anything identifiable as a vehicle mode (seriously, most just look like "the same robot folded in half"), Bumblebee has gotten a clear upgrade. Like both of Bumblebee's previous forms, the inner robot turns into a Volkswagen Beetle. It's truly an iconic form. Sadly, no new version of Bumblebee released nowadays is ever likely to turn into a Beetle again, since licensing issues with car companies are considered a much more serious issue for toy companies to be aware of now, and Volkswagen has made it clear that they want nothing to do with a "warlike" toyline such as Transformers. I suppose it's pretty hard to argue with them with that giant gun on top of the Beetle! Pretender Bumblebee has one rather odd distinction, though. In designing Bumblebee's head, they went with the shape of often confused fellow Minibot Cliffjumper, rather than the shape of Bumblebee's original toy (you can see an even better side-by-side comparison of heads on Bumblebee's Transformers wiki toy page. Just scroll down a bit).

I mentioned having more than one Pretender Classic, but since these were available separately, I'll deal with the other next week. There's a more complicated story behind how I got that one, anyway....