Over a year and a half ago, I put up some pictures of custom boxes I had created for Happy Meal Transformers. Since that time, I have made a few more boxes. None of these are of the quality or "G1-accuracy" as Mirage's Boxes, but I think they're pretty nice, and worth showing off once in a while. 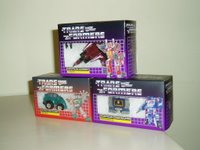 One limitation I've always been under is that my printer can only handle regular 8-and-a-half-inch width paper, so I'll never be able to do these boxes for figures larger than the World's Smallest Thrust you see at the top. I also don't have access to facilities that would allow me to custom-mold clear plastic inserts (of course, neither does any other custom box maker that I'm aware of), which is why I've taken to using styrofoam. If you'll look at those Happy Meal boxes I made in 2005, you'll see that I tried to twisty-tie them to a colored paper backing. This is fine for display purposes, but does have the unfortunate effect of allowing the toys to slide around inside the box, which can be problematic for transport. Styrofoam has the advantage of being more stable, and is reasonably easy to shape, but it is rather messy. (You might even be able to see some lose bits of styrofoam trapped in that Thrust box.) Also it doesn't work as well for certain TFs (I have a couple more Happy Meal TFs I needed to stick with the twisty ties for). 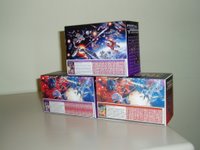 Still, displaying some of these smaller TFs in this way does give the toys some visual character that they might not have if they were displayed loose. By placing small versions of the original Tech Specs on the back (or a custom, as in the case of toys like Tap-Out, which weren't originally created when Tech Specs were done this way. I've done a few custom Tech Specs myself, but the Tap-Out Tech Spec was done by James Byun), the feeling that these smaller toys could have been originally sold in boxes like this is reinforced.

I created the template for these boxes using Adobe Photoshop. The files are fairly large, but I'm willing to share them if anyone's interested, and can work with Photoshop files. Just send me an e-mail, and I'll send you an example. Feel free to ask for a specific character, although the odds are I won't have it. I can definitely give you something from the right faction, though. Just remember that this kind of template will only work for fairly small figures.
Posted by Mark Baker-Wright at 9:10 AM