To the best of my knowledge, there are only two classes of Transformers, in the entire history of the franchise, that have been explicitly created to be a specific scale when compared to the "real" vehicles the toys represent. 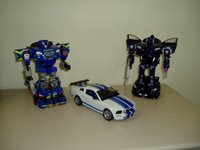 The first of these, the Alternators, are still fairly widely available in stores. These transform into 1:24 replicas of actual automobiles you might see on the street today (1:24 being a fairly common scale for model cars). In fact, Hasbro licenses the rights to these vehicle designs from the automobile manufacturers, so in the case of Alternators Wheeljack (center), who turns into a Ford Mustang, you'll see the Ford logo proudly displayed on the packaging.

For many fans, the Alternators represent the pinnacle of Transformers design. Not only are they realistic vehicles (truly "Robots in Disguise"), but their transformations are often intricate and complex. For me, this is the line's major downfall: they're too complex. And the instructions, simple line art drawings with few or no words, are often no help at all. I was reminded of this fact when trying to transform these toys for this photo. I actually tried to do Smokescreen (on the left) first, but couldn't get all the vehicle parts to line up properly when I was all done. I finally gave up on that one, put the toy back in robot mode, and tried my hands at Wheeljack. Wheeljack is also ridiculously complicated, and I actually had to pop several parts off of the toy to finish the transformation, although when all the parts were replaced, I at least had a vehicle that looked right. Although the roughly $20 price tag you'll find on these toys isn't too unrealistic for what you get, it's high enough that when coupled with the frustration factor I have on these things, I tend not to buy Alternators on my own. In fact, I think all but one of the four I have (including one that isn't pictured here) were gifts. This isn't to say that I'm upset to have been given these toys. It's just that the frustration gives me pause when it comes to buying them on my own. If you have the patience to deal with the transformations, though, these are still very worthwhile toys. 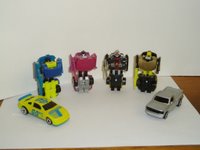 The other class of Transformers designed to a specific scale were originally released as the G2 Go-Bots. These toys have been repainted and reissued quite a few times over the years, and are more commonly referred to these days as "Spychangers" (a name they picked up in the "Robots in Disguise" line of 2001-2002). These toys are 1:64 scale, specifically designed to be compatible with "Hot Wheels"-style racing sets. (One of these days, I'm going to splurge for one of those loop-the-loop tracks and put these guys on it!)

In contrast with the Alternators, transformation for these toys is simplicity itself. Nearly every one transforms in the same way: pull the back of the car out, flip the hood down, and pull the arms out to the sides. A few other toys were released in the class as part of the "Robots in Disguise" line that have slightly different transformations, but these also weren't specifically designed to be in the 1:64 scale of the original vehicles on which they're based (although they still have the free-wheeling axles, so they'll still work on the race tracks).

It may be worth noting that both of these lines used scales that were chosen specifically because of some competitor's product. It may also be worth noting that there are one or two actual Transformers toys (in isolation, and not really as part of a classification of TFs) that transform into a play version of some actual item (1-to-1 scale, if you will), but that's really not the same thing. Even still, for all of the clamor out there in the Transformers fandom for toys that are "to scale," such toys really the exception, and not the rule.
Posted by Mark Baker-Wright at 10:26 AM