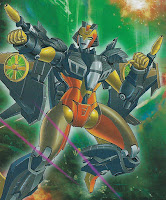 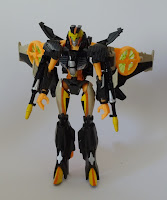 The basic idea, in a nutshell, is that when Airazor was first introduced in the Beast Wars cartoon, it was heavily implied that she was the Maximal equivalent of a newborn. Thus, she should have no "pre-Beast Wars" existence. Yet, both "Dawn of Future's Past" (the BotCon 2006 story) and "Dawn of the Predacus" (the BotCon 2016 story) depict a pre-Beast Wars Airazor (there is some dispute as to whether both stories can be made compatible with each other, let alone the cartoon. I'm not interested here in that argument. Suffice it to say that each story depicts a different form for pre-beast Airazor. BotCon 2006's version wasn't a toy at the convention, but was one of the first club exclusives the following year). 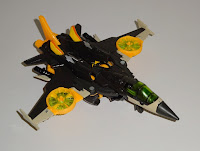 Like all convention exclusives, BotCon 2016 Airazor uses a pre-existing mold, but although the original version, Windblade, was more-or-less widely available (with a caveat for some distribution inconsistencies), Airazor uses a remolded version, from Slipstream, that was previously available only in Japan. With only 750 units made, it was among the rarest exclusive toys at the convention*, and sold out before the convention was over, contributing to a moderately-expensive purchase if you're looking to buy this on eBay now. If you're a fan of the character, and can live with the concept of her having existed before the events of the Beast Wars cartoon, I nonetheless recommend the figure.
*In fact, I might have legitimately said the rarest, given caveats surrounding Golden Ticket exclusive Flash Sentry and Custom Class Ratchet.
Posted by Mark Baker-Wright at 9:00 AM