Celebrating the 25th anniversary of Beast Wars with Rhinox

I'm giving a lot of attention to Generation 2 this year (hosting a G2-themed podcast and all...), but the fact is, while Generation 2 brought the Transformers toy line back from the dead, it really didn't save the franchise for the long haul. In fact, sales of Generation 2 toys were disappointing. To ensure the survival of Transformers for the next couple decades (and more?), the franchise had to undergo a major revision. This was the Beast Wars franchise, which celebrates its 25th anniversary this year (this post is timed to approximate the anniversary of the premiere of the Beast Wars cartoon, which was on April 22nd, 1996, but of course some of the toys came out before that date...). 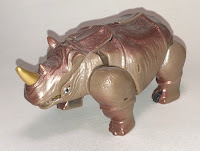 Rhinox was one of the main characters as the cartoon started out, and in fact was the only such character to make it through the entire series without significant change (although his role did diminish somewhat as the focus turned to characters with more recent toys). Like many Beast Wars characters, his name is a fairly obvious reference to the animal form he assumes (note that images here are of the "10th anniversary" reissue of the original Rhinox mold). 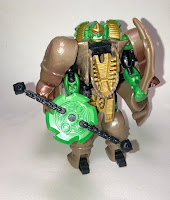 Rhinox's transformation to robot mode isn't terribly complicated, but he does have a lot of beast mode kibble that never quite gets out of the way, making him a bit awkward. He does, however, incorporate a couple of weapons cleverly hidden inside various parts of the figure. The sword was Rhinox's beast mode tail, while the melee weapon (which evolved into the "chaingun of doom" in the cartoon) is assembled from pieces attached elsewhere inside the beast mode shell and midsection. It has a fun action feature whereby if you press on a black button behind the sawblade, the whole thing spins around. Like other figures of Rhinox's size from this early era of the Beast Wars toyline, he also has a "mutant head" whereby panels to either side of the main robot head close together to form an alternate head, as seen here. 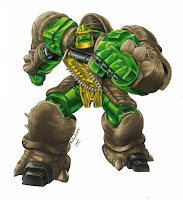 Sadly, although Rhinox made it through all three seasons of the Beast Wars cartoon apparently unscathed, he did not fare so well in its immediate sequel, Beast Machines, where he was captured almost immediately upon his return to Cybertron, and his spark used to become the Vehicon, Tankor. As Tankor, Rhinox ultimately fought against both Optimus Primal and Megatron, before finally being killed in an apocalyptic clash at the end of Beast Machines' first season. As Primal himself suggested, fans tend to remember Rhinox as the loyal Maximal he originally was, rather than the treacherous Vehicon he became.
Posted by Mark Baker-Wright at 10:30 AM