I can't really claim intentional holiday alignment here, choosing a robot with green in it for St. Patrick's Day. This was the natural item from my collection to highlight after beginning our look at the Generation Two Skyscorchers with Eagle Eye last month. Indeed, Eagle Eye has more green than Terradive does, which itself gets a bit to why I'm looking at Terradive now. 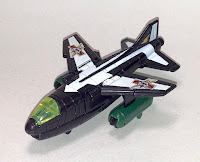 In all, there were four Skyscorchers created (again, this was the name these characters had in the UK, before the Generation Two branding actually started in the US). This was done in two pairs using a process commonly referred to as "gang-molding." Basically, this means that more than one robot is created on a single set of molds. Often, what happens is there are two molds in a set, each in a different color, with parts for the two robots split up between the two colors, setting up the layouts in such a way that the two colors are essentially swapped between the two robots. So Terradive here is mostly black with some green highlights, while Eagle Eye was mostly green with some black highlights. You can see the same concept behind the original Micromaster patrols, which were also done in two pairs of four, with each toy in a pair essentially swapping colors.

Eagle-eyed readers (pardon the pun) will notice that the hand-weapon Terradive has in this image is not the hand-weapon the Terradive should have, but rather is Eagle Eye's hand-weapon. I got my specimen second-hand, but as it came with his original card, I thought for quite some time that I got the full toy as it was originally sold (simply loose). Apparently the seller had mis-assembled the packet, including Eagle Eye's weapon by mistake. An examination of Terradive's entry on tfu.info suggests that the two weapons are very similar, so I can understand the error, but it means that the weapon I have doesn't really fit properly to the jet mode to become the underside radar that all Skyscorchers should have. Perhaps some day I'll get the proper weapon, but for now, I have two identical weapons, one of which I've assigned to each robot. 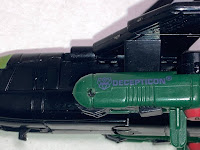 One feature that's distinctive to many (but not quite all) Generation Two toys is to addition of a faction-specific tampograph, usually placed in a nondescript location on the toy. It's a bit of an odd addition, in that it doesn't feel like the kind of faction labeling that the character would have in-fiction, but it does provide another distinctive layer to what makes Generation Two what it is. For further discussion of what made Generation Two distinctive, please join us on Sunday when the next episode of Not Your Father's Autobot: A Transformers: Generation 2 Comic Book Podcast drops. This time, we'll be discussing issue #2.
Posted by Mark Baker-Wright at 11:00 AM