When discussing figures from the Titans Return series, the second part of the "Prime Wars" trilogy that was arguably the franchise's primary focus from 2015-2018, I'm more or less compelled to reference the homage to the Headmasters toys of the mid-1980s. Let's get that part out of the way quickly. The tiny robot that becomes Blitzwing's head is named "Hazard." If you really want to see a close-up of Hazard, here you go. Now let's focus on the main toy....

Long-time fans will remember that Blitzwing was one of the franchise's original "triple changers," a concept that dates back to the pre-Transformers Diaclone line (although, of the "triplechanger"—I'm assuming the TFWiki has that parsing right—molds actually released in the Diaclone line, only Blitzwing's mold was rereleased in the Transformers line). All of the "Voyager"-sized toys in Titans Return were triple changers, and all three of the original Decepticon triple changers (that is, Blitzwing, Astrotrain, and Octane) were featured among the Titans Return Voyagers, although Blitzwing was the only one that I purchased (I do have the mold created for Octane, but in the form of another character, which I'll get to in a few months).

I believe that this is the fourth distinct mold created for Blitzwing, counting one created for the Animated line and a 2013 reinterpretation of the Generation One character for the "Thrilling 30" era of the Generations line (a longstanding brand for Generation One homages of which Titans Return, itself, is also technically a part). Titans Return Blitzwing is arguably the most faithful updating of the G1 toy to date (the added Headmaster/Titan Master gimmick notwithstanding). Like all Blitzwings, it can be transformed into either a jet (pictured here) or a tank (pictured above). 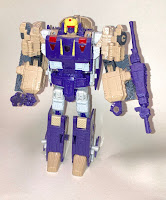 When discussing fellow Titans Return Voyager Galvatron, I commented on how the line-wide gimmick of inter-compatible heads all the same size (but using Deluxe-sized toys as the default) meant that larger toys had to compensate in some way. Thankfully, Blitzwing fares far better than Galvatron did, with a couple of panels on either side of Blitzwing's face giving the head a bit more heft without the pathetic flat mask Galvatron was saddled with. I consider this version of Blitzwing the all-but definitive version of the character. I could have done without the added Headmaster/Titan Master gimmick, but they made it so the gimmick isn't too obtrusive, and it can largely be ignored if you want to. Just don't lose the head when doing so!
Posted by Mark Baker-Wright at 10:30 AM