Whenever possible, the folks behind the creation of BotCon exclusives liked to do homages to obscure characters or concepts, often layering on several in a single figure if they could get away with it. Such was the case with Parasite, one of the BotCon 2015 exclusives.

Parasite was sold as part of a four-pack of "Waruder Marauders." The original Waruders were the insectoid faction in the pre-Transformers Diaclone line, whose molds were recolored into the original Insecticon trio. The Marauders were all repaints of the 2013 Generations Waspinator toy, arguably the most well-known insect Transformer since the original Insecticons, and almost certainly the most viable mold out of the available options in 2015. 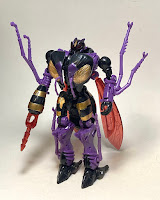 Besides being homages to the Diaclone Waruders, each Waruder Marauder was given a color scheme designed as a specific homage to a previous concept. Parasite's color scheme was to have been used for an unreleased Waspinator toy intended to have been available during the Halloween season as what would have been part of a "Halloween Horrorcon" set. 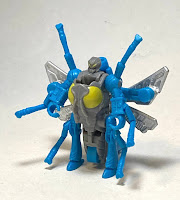 The original Diaclone toys all came with tiny "pilot" figures which could fit inside cockpits on the Waruder toys (cockpits which were retained when those toys became Transformers, although the pilot figures were not). Although the BotCon Waruders, being repaints of toys which were not created with such features in mind, do not have cockpits, they did come with pilot figures, which for the Marauders were also redecos of figures originally created to be Waspinator. This is "Ripper." Ripper's mold was originally a small Waspinator figure intended to serve as a "Targetmaster"-like partner to Starscream (itself an homage to a classic episode of the Beast Wars cartoon). Thus, Ripper can transform, not only into a miniature wasp-like creature, but into a weapon for Parasite, as seen via this link.

In yet another spate of homages, each Waruder Marauder toy was given a name borrowed from characters in the GI Joe franchise, the Parasite being a vehicle used by "ruthless terrorist organization" Cobra, while Ripper was a member of the Dreadnoks, a related enemy faction (all the BotCon Waruder Marauder "pilots" were named after Dreadnoks).