For many fans, BotCon 2006 was the "high point" for convention exclusive popularity (others might argue for the next year, but while those toys were popular, they were also controversial just for being convention exclusives). Early exclusives had tended to be previously-unknown characters (with the very first BotCon exclusive, which wasn't originally planned to be an exclusive, being a clear exception). A few years before Fun Publications started running Transformers conventions in 2005, exclusives started to be slightly better-known characters as "updated" versions of the forms previously known. But even these stilled generally stayed away from the "top tier" of the Transformers roster. Also, there were usually, at best, only a small handful of toys made available at a given convention. But starting with BotCon 2005, all that was starting to change.... 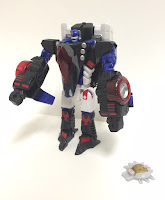 Fun Publications' model for selling exclusives was to tie a whole set of toys to registration for the convention, and to try to make those and other toys (to be revealed and sold only at the convention itself) all fit some overarching theme. Some themes, as long-time fans and readers already know, worked better than others, but with the 2006 "Dawn of Future's Past" set... being a "pre-Beast Wars" theme, Fun Publication had a theme that captured people's interest. For the first time ever, already-existing "top tier" characters would be given forms that were clearly intended to precede the versions we'd previously known. 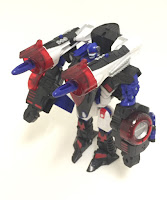 In the case of pre-beast Optimus Primal, the mold chosen was that of Crumplezone, a toy created for the Cybertron line that was frequently accused of having ape-like proportions, making it an ideal fit for Primal's pre-beast robot mode. As most of the BotCon 2006 toys (and all of the toys featured in the pre-registration box set) were redecos or retools of Cybertron toys, the decision was made to redeco the "Cyber Planet Keys" that came with such toys to resemble the "Golden Disk" featured on the Beast Wars cartoon. Inserting the "Golden Disk Keys" would, of course, unlock the same special features on the BotCon toys as on the Cybertron toys they were created out of. 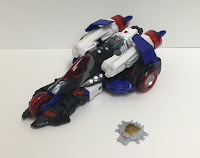 Often, when attempting to take an existing toy and rework it into a character it wasn't originally intended to resemble, one mode fits less well than the other. Such is the case with Optimus Primal's pre-beast vehicle mode, which really doesn't resemble anything the character has been associated with before or since. There's nothing inherently wrong with a vehicle mode designed to be some kind of high-speed racer. There's simply nothing about this mode that can otherwise be associated with the character of Optimus Primal. 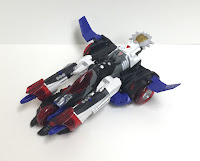 But one works with what one has available. This mode retains the ability to unlock those large engines/missile launchers when inserting the "Golden Disk Key" in the slot in back, nicely deploying a couple of small wings on either side of the back, as well. I don't think anyone pretends that these wings would enable Primal to fly. As with Crumplezone, they simply seem to be there as some kind of "super speed boost" mode, perhaps in the same way that a spoiler on the back of a racing car serves to keep a race car grounded while racing at high speeds. I don't think Primal ever uses either version of his pre-beast vehicle mode in either of the stories this version of the character appears in, so you can pretty much let your imagination go in whatever direction you want it to. Me? My imagination took these toys and put them in a game of Family Feud....
Posted by Mark Baker-Wright at 9:00 AM