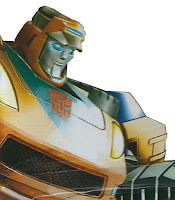 Poor Wheelie just never gets any respect. From pretty much the moment he first appeared in the 1986 animated Transformers movie, he's been considered a joke to many fans. Admittedly, with his penchant for speaking in rhyme for absolutely every little thing, Wheelie made himself a target pretty much immediately, and attempts to use the character in (English-language) fiction over the years have had mixed success with the concept, at best.* It may thus come as a surprise to learn that Wheelie's 2012 toy (only the third distinct mold to be used for the character in over 25 years) was actually in high demand. 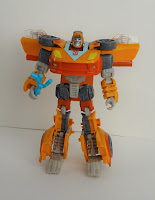 Admittedly, this was at least in part due to the difficulty in actually locating a specimen in the United States. Wheelie was one of more than a dozen "Global Development Organization" toys created by Hasbro's Asian division for their markets. GDO toys (as they were commonly called) were all remolds (or just redecos, especially in the case of smaller toys) of existing figures, but they all paid homage to classic "Generation One" characters. Coupling these characters with the uncertainty of ever coming to the United States at all (and, when they did, being exclusive to Toys R Us stores), made the GDO toys both hard to find and in high demand, at least for a time.

GDO Wheelie used the popular Reveal the Shield Special Ops Jazz mold, which over the course of several years was used for quite a few toys (including the previously-featured Shattered Glass Treadshot), which no doubt aided in Wheelie's temporary popularity. It included the speakers from the Jazz mold (not pictured here), but not the pistol, which was especially odd since it was retained in Wheelie's package art (also not visible in the cropped image at the top). Wheelie was given an entirely new-mold weapon in the form of a blue slingshot (that apparently could double as a pistol-type weapon, if the unnecessary extra 5mm peg on the side is anything to go by), and a new head, further cementing the idea that this was indeed a Wheelie toy.

While these toys were highly sought by collectors at the time, I'm honestly not sure how well the GDO experiment did for Hasbro, as no further GDO toys came out for many years (there seems to have been a couple of new GDO toys in 2015, but those were the only references I was able to find since 2012), and these toys can be found fairly inexpensively on eBay today. With that in mind, while I wouldn't recommend the GDO toys as any kind of an investment, I would nonetheless say that this is the best toy that the Wheelie character has ever gotten (I feel confident that the more recent Titans Returns toy has not proven me a liar), and it's worth getting if you have any affection for this character at all.
*Apparently Japanese-language Wheelie never had this gimmick, but if his role in the Japanese language Headmasters cartoon is an indication, that unfortunately didn't make him any more likable.