Robots in Disguise Ratbat and Sandsting (2016)

The concept, first introduced in 2002 with the beginning of the Armada franchise, became a major addition to the Transformers mythos for a few years, but fell into only intermittent use in the years after the so-called "Unicron Trilogy" (of which Armada was the first part) ended. They have returned in the past couple of years as a significant feature of the 2015 Robots in Disguise line (Henceforth abbreviated as RiD. This line is still current, but I mention the year it started to set it apart from the original Robots in Disguise line of 2001). 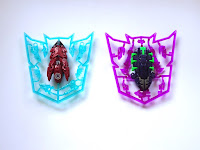 Whereas Armada Mini-Cons unlocked hidden features when attached to larger Transformers, RiD Mini-Cons turn into weapons that may be used by them. Ratbat and Sandsting* (left and right, respectively, throughout this entry) both turn into Decepticon torpedoes designed to be fired from the "Deployer" named Fracture. They also come with transparent energon armor, which must be cut from the plastic trees surrounding the figures (as shown. Images of the torpedo modes without the trees may be found here).

While Ratbat and Sandsting share nearly identical torpedo modes, their transformations are quite different, turning into a bat and a scorpion, respectively. The transformations are quite intuitive, basically just a single step, with some finessing for the final pose. The energon armor can then be fitted over these modes for some extra play value (although you would have to then take the armor back off before transforming back to torpedo mode. You can see what the beasts look like with armor attached here).

Hasbro added yet one more play feature, although oddly enough, they didn't tell anyone about it! If you bought both of these figures, plus the other two (Autobot!) Mini-Cons of their wave (Beastbox and Velocirazor), you can combine some of the energon armor from each of the four figures to create this multi-colored shark. If you were able to collect all four Mini-Cons from the previous wave, you could assemble a lion (although, IMHO, the shark is far more convincing). Although this feature is clearly intentional, neither the lion nor the shark are mentioned anywhere on the packages, nor in the instructions, of any of the toys you would buy to assemble them. For a "collect them all" feature, this is more than a little strange. I'm especially glad for the TFWiki. Without that resource to communicate extra features like this one, I might never find out about them!
*Just to avoid confusion, I should note here that although I normally feature multiple toys only when those toys were packaged together, Ratbat and Sandsting were purchased individually.
Posted by Mark Baker-Wright at 9:00 AM