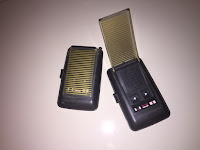 It was an all-day event. One of our local movie theaters was showing a Star Trek movie marathon. All five then-existing Star Trek movies, back-to-back, with a special preview of a few minutes' worth of the then-unreleased sixth Trek movie, The Undiscovered Country. As a not-quite-adult just about to enter my final year of high school, I enjoyed the celebratory event, recognizing the then-25th anniversary of the Star Trek franchise, immensely.

This week, I am forced to recognize that exactly that many years have passed again.

I feel so old.

In some ways, the Trek franchise was healthier 25 years ago than it is now. The sequel series, Star Trek: The Next Generation, was at the height of its own popularity, and would soon spin-off another series, Star Trek: Deep Space Nine (still, in my opinion, the best of all Star Trek series, if admittedly the one that diverged the farthest from the original Trek formula). New Star Trek movies came every couple of years, and there were still two more spin-off series to come in the following decade before things finally petered out with the indisputably disappointing performances of the tenth movie, Star Trek: Nemesis, and the prequel series Star Trek: Enterprise. After both of those efforts were done, the franchise lay largely fallow until the reboot movies came around several years later. While those movies have indeed been credited with revitalizing interest in the Trek franchise, it just doesn't feel the same.

An argument can be made that interest in Star Trek is about to turn a corner. The reboot movies have performed reasonably well (although it remains to be seen if the most recent one will turn a profit), and the announcement of the upcoming series Star Trek: Discovery is generating buzz. But, even so, with Star Trek Beyond struggling to make a profit nearly two months after its release, and Discovery being locked behind CBS' attempt at a Netflix-style subscription service, I just can't help but feel that the best days of the franchise are behind us.

I'd love to be proven wrong. Star Trek has, at its best, provided a message of hope for the future that is sorely needed in today's world, without ignoring the difficulties that must be overcome to get there.  I would love to see more of that attitude of striving toward something positive, rather than simply trying to defend ourselves against the dangers that seem all too real today.

But, mostly, I'd just love to feel that excitement I felt 25 years ago again.
Posted by Mark Baker-Wright at 9:00 AM