It's Easter time! What Transformer could be more appropriate to feature than the one that turns into a bunny rabbit? To the best of my knowledge, only one Transformer has been created in the 30+ years of the franchise with this distinction.* Therefore, I bring you "Stampy."

Stampy comes from the Beast Wars Neo line, one of two lines which extended the Beast saga for the Japanese audience while they waited for the American Beast Wars cartoon to be translated from English to Japanese. The way I understand it is that season 1 of Beast Wars aired first, then Beast Wars II came along featuring characters created mostly from redecos and remolds of existing toys. Beast Wars Neo came after that, with characters created almost entirely from newly-created molds (most of which have never received a proper American release to this day). Finally, translations of seasons 2 and 3 of our Beast Wars cartoon aired in Japan under the Beast Wars Metals banner. 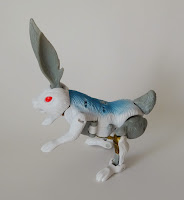 While Stampy's red eyes have caused more than one Transformers fan to make comparisons to Monty Python's Killer Rabbit of Caerbannog, such a characterization doesn't really fit Stampy as he appeared in the cartoon. Just as real rabbits are not generally known for their bravery in the face of adversity, often hopping away immediately if some other creature (say, a small child) approaches, Stampy is something of a coward. He is, however, considered valuable for gathering intelligence and scouting out new situations. 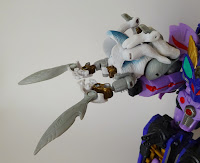 In what strikes me as the most ridiculous and unnecessary excuse for an official third mode in all of Transformers history, Stampy also has this "Scissor mode" which can be wielded by any Transformer with a 5 mm fist. If you push back on the rabbit tail in back of this so-called weapon, Stampy's rabbit ears (which are said to be diamond sharp blades) move together a bit... but nothing close to fully closing together. Even as a melee weapon, this thing's pretty weird, and I really have no idea why the designers went to the trouble of giving the figure the 5 mm peg (which sticks out of the robot mode's chest) to make it happen. But there it is. Stampy now stands ready to trim your hedges in preparation for the Easter holiday. *I've since learned of one other, at least kinda-sorta, which apparently even predates Stampy, called "Moon."
Posted by Mark Baker-Wright at 9:00 AM