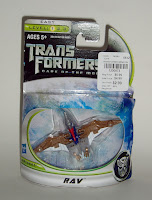 When I was a kid, I would always get a thrill out of walking through the aisles of a toy store and discovering a Transformer on the shelves that I had never seen before. In this information age, whereby the Internet usually informs fans of upcoming releases months before they arrive in stores, this experience is much less common than it was 25+ years ago, but it still happens once in a while. I mentioned one such experience a couple of months ago with the Speed Stars Leadfoot toy. It happened again a few weeks ago with Rav.

I found Rav on the shelves at a Tuesday Morning store, and according to the TFWiki, this toy was only distributed to what are sometimes called "market six" chains. This name is actually a bit of a misnomer today, as it is intended to mean any chain other than the "top five," but of the "top five" that led to the term, one (KB) is no longer in business, and another (K-Mart) is no longer a major force in selling toys. The other three: Wal-Mart, Target, and Toys R Us, are still the main ways that most Transformers toys are sold in America (in roughly that order). "Market six" toys can be notoriously hard to find because of this sometimes random-appearing distribution model.

Rav is a contender for the smallest Transformer I have ever bought individually at retail, competing for that distinction with "World's Smallest" Thrust, and I'm not sure that Thrust may not in fact be larger than Rav. Rav certainly comes with the smallest set of instructions I've ever seen, at least when folded down to fit in the package (I think Rav's instructions may unfold to slightly more surface area than Thrust's, but I've not compared the two directly). 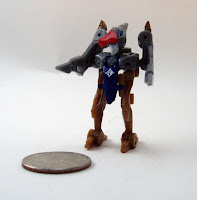 Rav is a repaint of the Mini-Con version of Swoop created during the Classics line, and in fact is colored to resemble Generation One Swoop's animation model. Like most Mini-Cons, the robot mode is somewhat questionable. In fact, the folks who took the pictures for the package themselves clearly had no idea what they were doing, as this image from the back of the package clearly attests.

The original Classics Swoop toy, like most Mini-Cons sold in the United States, was sold packaged together with other Transformers. This is usually done to make the resulting package worth charging one of Hasbro's pre-designed price-points (say, three Mini-Cons together being charged the same price as a "Scout" or a "Basic," back when such designations existed). This Mini-Con was sold on it's own for about $3, which is definitely proportionately higher than I would have paid for three of them, even years ago, but may well be as low as I've ever paid for a retail Transformer that wasn't on a massive clearance* (and I'm having trouble even thinking of examples of those that fall below the $3 threshold). As such, it makes for an inexpensive addition to one's collection... if you can find it.
*Careful examination of the price tag in the picture at the top demonstrates that Tuesday Morning considers this toy's retail price to be higher than $3. This may be true at other "market six" retailers such as drug stores — where prices are almost always ridiculously high — but I don't really count those prices as "normal," and $3 really does sound about right for this thing.
Posted by Mark Baker-Wright at 9:00 AM