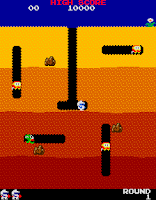 For most of the video games I'll be covering, I really haven't been able to lock down a firm date of release. Most of the time, all that I can find is a verification that the release was, in fact, in 1982. Dig Dug is the exception. According to Wikipedia, Dig Dug was released on April 19, 1982. Thus we have our first real 30th Anniversary celebration!* (Tosses confetti and blows on kazoo)

Depending on how you look at things, Dig Dug was perhaps an inversion of the Pac-Man concept (another game developed by Namco and named for its main character). In Pac-Man, you controlled a character chased by various enemies who would kill you if they touched you, but although eating ghosts was necessary for a high score, you didn't need to eat the ghosts to advance in the game. The way you advanced in Pac-Man was to clear the board of all of the dots on each maze. In Dig Dug, it didn't matter how much of the board you cleared out. You had to eliminate the monsters if you wanted to get to the next round!

Unlike the set-maze structure of Pac-Man, Dig Dug was set in an underground environment. The idea of an underground playfield allowed the player, to at least some degree, to control the area in which the monsters could attack. For the most part, the monsters—a group of round, red, balls with goggles called Pookas and a bunch of green fire-breathing dragons called Fygars—would only move around in the tunnels created by the Dig Dug character's own movement. In addition to the shovel which deployed automatically as Dig Dug moved around, Dig Dug could use an air pump to inflate the monsters, either stunning them (during which time Dig Dug could safely walk through them) or ultimately destroying them as they burst like an over-inflated balloon.

There were also several small rocks on the board. The rocks could not be moved directly, but if Dig Dug approached a rock from below, and then moved away from directly beneath it, the rock would drop down the tunnel crushing anything in its path (potentially including Dig Dug himself, so caution is recommended!). This is where the big points of the game were to be found, as you scored geometrically higher points for each additional monster you caught under the falling rock.

Unfortunately for Dig Dug, the monsters weren't strictly confined to the tunnels. From time to time, a monster would turn into a "ghost," which could then move through the solid dirt. Ghosts were still vulnerable both to the air pump and to rocks (as they fell), but the ability to approach through the tunnel walls could easily take an unwary Dig Dug by surprise if he's not paying attention!

Another element Dig Dug shared in common with Pac-Man is the occasional bonus that would appear in the center of the screen, which had to be grabbed within a certain amount of time after its appearance for extra points. On Dig Dug, you could reliably make the bonus appear after the second rock was dropped, so as long as you were paying attention to what you were doing, you could easily position yourself to get to the center of the board to grab the bonus item before it would disappear. (FYI, you had to walk over the item to collect it. You couldn't grab it by firing your air pump at it, the appearance of this image notwithstanding.)

Dig Dug exemplifies what made the arcade games of the early 80's so cool. It's a simple little game with fun and catchy music that you can learn quite quickly, but which can keep you challenged for a good long while.
*Yes, I know this is getting posted on the 18th. Close enough!
Posted by Mark Baker-Wright at 12:00 PM