Once upon a time, there was a company named Tonka. By the mid-1980's, they were known mostly for making sturdy, metal, toy trucks, which they had done quite successfully for several decades already by that point. But like many other companies, Tonka sought to expand, and had placed their footprint in a number of other sectors of the toy market. This included a line of transforming robot toys that came to be known as the most serious competitor to Hasbro's Transformers line: the GoBots.

GoBots toys, in general, were standardized to a far greater degree than the Transformers toys were at the time. While Transformers toys came in a wide variety of sizes, the vast majority of GoBots were roughly 3 ½" tall (and most of the exceptions fell within a standard "Super GoBots" size of around 5 to 6 inches). While the earliest Transformers were taken from the previously-existing Japanese "Microchange" and "Diaclone" lines, most GoBots used previously-existing molds created for the "Machine Robo" line in Japan.

Scooter is an excellent standard example of a GoBot. The character got a lot of visibility due to the character's central role in the Challenge of the GoBots cartoon that was created to help advertise the line (voiced by the legendary Frank Welker, who I had occasion to write about last month), and he demonstrates at least the standard articulation of most GoBots toys (i.e., the arms move, but that's about as much as you can do to pose the toy).* 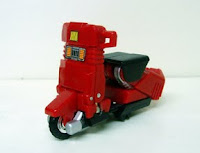 Transformation to alternate mode is fairly simple, but I think it could be fairly argued that GoBots were generally more complex than similar-sized Transformers of this era. For this reason, there has been a long-standing debate as to which line was inherently superior, and the GoBots line certainly has fans to this day.

Unfortunately for GoBots fans, it is unlikely that toys such as this one will ever get the benefit of being reissued as many 1980's-era Transformers toys have been. In 1991, the Tonka company was purchased by Hasbro, giving Hasbro the US rights to all of the GoBots characters and storylines. However, the molds for the toys themselves are retained by Bandai (the owners of Popy, which released the original Machine Robo toys), a competitor to TakaraTomy, the Japanese company connected to Transformers. Even if the original GoBot molds exist (and I really don't have much information on that question), Bandai is unlikely to want to help out their own competition by allowing TakaraTomy or Hasbro access to them, and Bandai (which, unlike Hasbro, operates in both the US and in Japan) remains unable to use the molds themselves because of Hasbro's US ownership of the GoBots concepts (at least, they couldn't be used as any actual GoBots reissue. I suppose Bandai could use 1980's Machine Robo molds for a totally new line in the US, but I can't imagine why they'd want to if they couldn't take advantage of the nostalgia factor connected to actually being GoBots).
*By the way, I know that I have the arms mistransformed (at least, according to the official instructions). I've always thought the official version, with the handlebars of the vehicle mode sticking out in front of Scooter's hands, looked absolutely ridiculous.
Posted by Mark Baker-Wright at 9:30 AM