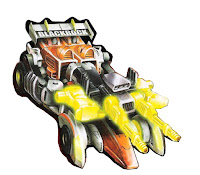 It's not really my habit to feature Transformers toys that are still available on retail shelves.  Part of the reason for this is because there are so many other Transformers blogs and sites out there that do this already, and I would just as soon focus my attentions elsewhere, but some of it really is due to the fact that I've got such a backlog of older toys that have kept my interest over time, there's really very little need for me to go out looking for more just so that I can blog about them.  Even so, when I saw this toy at the store recently, it caught my eye immediately for a very personal reason.  Perhaps you can tell what that reason is already in the official art to the left. 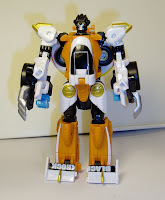 But, before I get to that, let's talk about the Power Core Combiners line.  This is a new line for 2010, and seeks to release toys with a unique twist on the ever-popular combiners concept.  Power Core Combiners toys are sold in either two-packs or five-packs, although perhaps that numerical designation is a bit misleading.  In both cases, there is one "main" figure, called a "Commander"—in this case, Leadfoot.  All other items in the "pack" can legitimately be said to be accessories to the "Commander" figure. 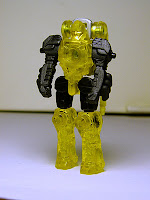 In the case of two-packs like Leadfoot, the single accessory is a Mini-Con (Pinpoint, in this example.  I wonder if they were trying to get to the old Targetmaster name "Pinpointer," and couldn't for some reason... or if anyone at Hasbro even noticed the similarity).  Power Core Combiner Mini-Cons are all molded in translucent plastic, presumably to convey the idea of them glowing with energy.  These Mini-Cons can transform in a number of ways to connect to the larger figure as weapons or tools. 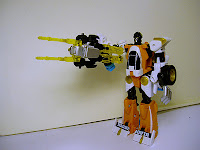 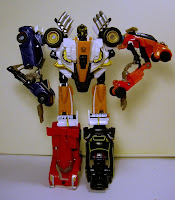 The accessories that come with the Power Core Combiner five-packs aren't Mini-Cons.  Instead, you get four drone vehicles with the main figure.  These four drones can then attach to the main "Commander" figure as limbs of a larger "combiner" robot.  It is important to recognize that the drones do not turn into robots, themselves.  This is part of why I suggest that to call these sets five-packs is misleading.  You get one full-fledged Transformer, and four limb drones.  However, these limb drones are compatible with any Power Core Combiner Commander.  Thus, Leadfoot is shown here in combiner mode, using the drones from the Double Clutch/"Rallybots" set. 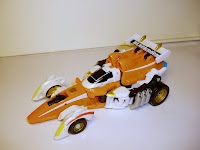 Although Power Core Combiners clearly have a lot of versatility and play value, it seems that Transformers fans haven't warmed up to them especially well.  Perhaps it's because of the drones.  Perhaps some of the features seem to work better on paper than in practice.  I'll leave that to the individual to decide.  I certainly don't feel as though I've wasted my money (admittedly, I got these on sale and with a $5 coupon, to boot!).  What really prompted me to get this toy and do this review, however, is the single word written on the vehicle-mode spoiler (click the thumbnail for a closer look).  "Blackrock" is a reference to G.B. Blackrock, human ally of the Autobots from the Marvel Transformers comic, who I have over the past decade adopted as one of my online avatars.  I believe that this spoiler represents the first time Hasbro has explicitly referenced the character on a Transformer toy (they got really close with "Blockrock"—note the "o" where an "a" would be—a few years ago).  As such, I couldn't pass up the opportunity to add this toy to my collection!
Posted by Mark Baker-Wright at 4:00 PM