Transformers Then and Now: Warpath 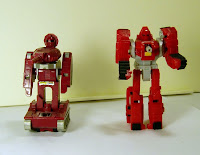 As I mentioned on the Aveo Swerve entry, I'm working on ways to keep things fresh and interesting.  This is as much for myself as for the benefit of my readers.  One thing I hope to do from time to time is a bit more explicit demonstration of how Hasbro has updated certain Transformers characters that were introduced more than 20 years ago, much as I've already done with Cosmos back in July. The character of Warpath was introduced in 1985, at the same time as Cosmos.  The 1985 toy is on the left.  Oddly enough, the updated toy, released last year and shown on the right, was introduced at the same time as the updated Cosmos toy.  Serendipity!

One perhaps less desirable effect of the passage of time is the fact that toy manufacturers are more concerned these days with potential legal action, as vehicle makers (rightly!) seek to protect their copyrights and trademarks. While the Transformers franchise has always been about "Robots in Disguise" to a greater or lesser degree, back in the '80s, a good many Transformers turned into something that was patterned off of a very real, existing, piece of machinery.  1985 Warpath, for example, is a fairly realistic-looking tank (in fact, the TFWiki says it's a "General Motors M551A1 Sheridan ARAAV tank," but that's a level of precision I could never hope to match, especially in regard to military vehicles!).  2009 Warpath, on the other hand, is a fantastic "H-Tank" unlike anything out there in the real world.

If the disguise is less real-world accurate, though, the new version of Warpath is a superior toy on perhaps every other level, which is only to be expected.  In fact, although 2009 Warpath is a "Legends" class toy (one of the very smallest currently made), he boasts two separate legs and bendable elbows (the only "Legends" toy able to do this so far!), allowing for a good range of poses.  If you can find this toy (and good luck with that.  Like Cosmos, I've only found it at Rite Aid, and at a price comparable to most "Deluxe" class figures at Toys R Us or Target), I recommend picking it up.  Even 1985 Warpath can be purchased off of eBay for a reasonable price, and is worth it if you care about such old toys (but, if you do, and are reading this page, the odds are better than not that you've already bought a 1985 Warpath!).
Posted by Mark Baker-Wright at 12:00 AM