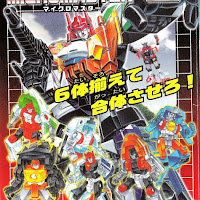 In 1991, the original American Transformers line was on its last legs, with the Action Master toys already released and even starting to be clearanced, and with no new Transformers toys to be made by Hasbro for another couple of years. The Japanese line run by Takara was still plugging along, and was increasingly moving in an independent direction, releasing quite a few toys that either never saw release in America, or didn't do so for another decade or so. One concept that Takara used quite a bit was that of Micromaster combiners with six members (although, to be precise, the Japanese didn't call them "Micromasters" at the time, but rather "Micro Transformers"). Sixliner was the first of these to be released. 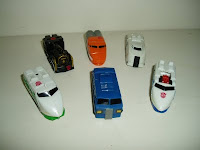 Sixliner was a team of six small locomotive engines of various types. Although most Americans seem to think of trains as something firmly in our country's past, the Japanese use trains much more readily today, and are certainly leagues ahead of us in the use of high-speed bullet trains. I actually wish that the United States would step up and advance bullet train technology more aggressively, and not just because it would mean we'd get more Transformers like this released here! 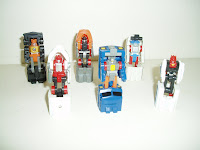 For the most part, the members of the Sixliner team transform in the standard (if simple) Micromaster fashion. Flip down the feet, maybe flip up the head (just on Spark, actually), and pose the arms, and that's pretty much it. By the way, in both the picture above and this one, we're looking at D-Go, Alan, and Joe on the top row (from left to right), and on the second row we have Leaf, Night, and Spark. I'm not entirely sure what to say about the names, other than that the inclusion of two clearly "human" names is definitely unusual, and indeed I don't think it has ever happened in the American line (unless the Transformer represented a non-Cybertronian human character, such as Spike). And what's up with "Leaf"? (An old translation had that name as "Leif," which would have kept the "human name" thing going on, but I trust that the TF Wiki folks know what they're talking about.)

In order to make the combined form, one has to use various attachment pieces. This wasn't uncommon in the Generation One era, but the Micromaster six-combiners are unusual in that there is actually no point at which one team member connects directly with another member! This combined form is entirely dependent on the attachments! And one member of the team (D-Go) doesn't seem to be necessary to the combined form at all! He's just stuck there in back, so you can't even see him in this picture here, and if I were to remove him, you'd never notice, as the rest of the robot would still look perfectly functional. I find all this to be more than a little like cheating, but it is what it is. I tend not to call these combined forms "giant robots" as I sometimes would for, say, the Seacons (although I note that I didn't use the phrase in that entry), because the form only stands about seven inches tall, shorter than a considerable number of "regular" Transformers toys.

In most Generation One-era combiners, there really isn't anything you can do with the fists, feet, and the head when the team isn't in combined robot form. Here, the designers cobbled together a few weapon modes using those parts so that they can be carried behind the team members in locomotive mode, using a hitch designed on the back of each one. Three of the members have "male" connectors, while the other three have "female" connectors, so there is some limitation on which weapon mode can be used by which team member. These connectors are also useful for pairing up team members two-by-two, as demonstrated by Leaf and Spark in the picture here (D-Go is just here to get all six in the shot).

In the original 1991 release, Sixliner was only sold as a complete set, but when the toys were reissued in 2002 as part of the Micromaster Collection line (yes, the Japanese are calling them "Micromasters" now), they were sold individually. The toys I have are the reissue versions, which are easily discernible by the lack of stickers, which have been replaced with tampographs and painted details. I'm really not a fan of stickers, and wish that all reissues were done this way!

A number of years ago, I created these Tech Specs for the Sixliner team members (and for the combined form) using translations provided by Doug Dlin. Here they are as an extra bonus.