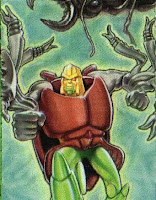 1996 was a year of important change, both for me personally as well as for the Transformers franchise. 1996 was the year I graduated from college and started what would become a long (and depending on how one defines one's terms, not yet completed even today) career as a seminarian. It was also the year that the Beast Wars brand was born.

There were several reasons for this major shift in focus within the Transformers concept. One of these was that Hasbro had assimilated one-time rival Kenner a few years previously. At about the time that Hasbro decided that the Generation Two line was not performing as well as they had hoped, Hasbro also decided to move all of their "boys" toy lines to Kenner, which was then a still separately run sub-division owned by Hasbro. Kenner was given instructions to revitalize the Transformers franchise, and so they decided to rework the concept rather dramatically. Instead of robots that turned into vehicles and other mechanical forms, the new Transformers would be robots that turned into "realistic" animal forms. Instead of the Autobots and the Decepticons, the factions were renamed as the Maximals and the Predacons.

In an effort to advertise the new line, Kenner arranged to have the Beast Wars line featured as a Happy Meal promotion at McDonald's. Although this wasn't the first time that Transformers had been featured in fast-food kid's meals (or even at McDonald's), it was the first time that such a promotion actually featured transforming toys (it has been pointed out that there were earlier Happy Meals and other fast-food promotions with transforming toys such as food items that turned into robots, but these weren't Transformers). The 1996 line of Beast Wars Happy Meal toys is also fairly unique in that it's the only line to date to feature characters that weren't featured elsewhere in the franchise (at least, not at the time. The 2007 Beast Wars Sourcebook did finally create bios for these obscure guys). Perhaps that explains the less-than-creative names for the toys, which are all pretty much just the names of the animals they turn into, such as Beetle here.

Anyone expecting a difficult or complicated transformation really has no business looking for it in a Happy Meal toy, but I think Beetle is one of the better of the four toys that came out of this promotion (the others being Panther, Rhino, and Manta Ray). The chest is a bit hollow-looking, especially where the legs come up to meet it, but I still think it works pretty well, all things considered. And the legs actually have articulation (required for transformation), which is again better than one should expect out of a Happy Meal toy.

Beetle and the other toys of this promotion each came with a standard (more so at the time than now) Happy Meal box. There were two possible boxes: one for the Maximals and one for the Predacons (Here are some images of the Maximal Happy Meal box, and this blog has some pretty good pictures of one side of the Predacon Happy Meal box). These boxes had a few tell-tale signs that this promotion was put together in a transition time between the end of Generation Two and the beginning of Beast Wars proper. For example, the Generation Two logo is still present in several places, complete with G2 Autobot symbol (which wasn't used in Beast Wars at all). Also, Optimus Primal and Megatron are featured in their bat and crocodile forms, as they appeared in the two-pack which was the first Beast Wars item to be released at retail. These forms were all-but-forgotten by the time the Beast Wars cartoon started featuring them in their gorilla and T-Rex forms. All in all, these toys are an interesting glimpse into a important time in the franchise's history.
Posted by Mark Baker-Wright at 12:00 AM