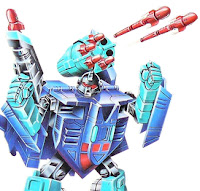 Although the first toys to come out of the Generation Two line were merely repaints of older Transformers, there were a number of unique gems, as well. Among these was Dreadwing, one of the largest Transformers in the entire Generation Two line, with only Optimus Prime and Megatron even being comparable. Stealth bombers were apparently rather popular in the early 90s, and this was one of several Transformers to adopt this particular alternate mode. Part of what makes this particular toy special was the fact that the bomber is actually comprised of two separate Transformers. If you pull out the back portion of the toy, you actually get another jet that had been riding in a pocket at Dreadwing's back. This smaller jet is called Smokescreen. Smokescreen is a full-fledged Transformer in his own right; much more so than the little extras that came with Metroplex. Yet it seems to me that the official works of fiction have paid considerably less attention to this nifty extra toy than they have to, say, Scamper. In addition, the Dreadwing portion of the toy has a second alternative mode, a kind of a tank. The tank probably isn't realistic enough to consider Dreadwing a true triple-changer, but it's worth noting, and takes good advantage of the toy's distinctive Gatling gun weapon. The idea is that, if you turn the back part of the Gatling gun like a doorknob, each missile fires one by one in sequence. If you have the whole thing pointed right, it actually works quite well. However, the missiles don't "lock" into place especially well, so if the gun is pointed down at all, the missiles just fall out on their own, which rather spoils the effect. Both characters in this set have names that were used in G1, although neither was intended to be the same character as the namesake. In the case of Smokescreen, this is reasonably obvious, as the original Smokescreen was an Autobot that turned into a sports car. The only similarity between this Smokescreen (a Decepticon) and that one is the name. Dreadwing is another story. Although this Dreadwing is not intended to represent the Dreadwing that was the combined form of Powermasters Darkwing and Dreadwind, the name is so confusingly similar that when the character based on this toy appeared in the Generation Two comic, writer Simon Furman actually went to some lengths to demonstrate how Darkwing was damaged and rebuilt into this form. If only he'd gotten the name right! Generation Two brought the concept of Transformers back from American toy store oblivion, but although sales were at least somewhat respectable, they weren't considered good enough to keep the line going. However, rather than kill off the Transformers concept again, Hasbro decided to take the line in a totally new direction. This new direction was "Beast Wars," which was a huge success, and Transformers have been released continuously ever since. Although I did collect some "Beast Wars" figures when they originally came out, I sold all of my post-G2 toys in a major purge nearly a decade ago (before the "Beast era" was over) when I was desperate for some cash (although I've reacquired a few "Beast" toys since). For this reason, this week will be the last entry in the weekly Transformers feature to specifically focus on the oldest parts of my collection. Starting next week, this feature will move to more of a random "Transformer of the Week" concept. I still have lots of Transformers left to cover, so hopefully I can share a few surprises!
Posted by Mark Baker-Wright at 7:00 AM