I've noticed a trend in my toy collecting in recent times. More and more of the figures I'm picking up use clear plastic. Some of this has certainly been done without conscious thought, as the official Transformers collectors Club has been giving its members clear exclusives as membership incentives each year (and will continue to do so for at least two more years). Now, I know that clear plastic isn't everyone's cup of tea, but I actually think it's pretty cool. There are things you can do with clear plastic that you just can't do with normal plastic.

To give you an idea of what I'm talking about, here are those three figures again (What? You didn't click on the links above already?), this time photographed with a light source directly behind them.

Of course, this type of picture is no substitute for the regular pictures to actually see what the toy looks like, but it's still something you can't do with a regular, opaque figure. 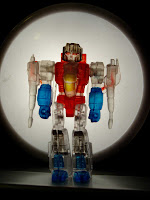 My latest purchase from the guy at Custom Masters was the "ghost Starscream" figure, which works especially well in front of the light. For those unfamiliar with the original Transformers cartoon, Starscream was killed off in the 1986 animated movie, but returned for a couple of guest appearances in the television cartoon as a "ghost" who could possess other Transformers. This character remains one of the most iconic villains in the entire Transformers franchise. 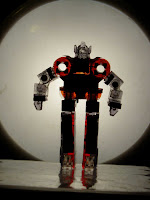 At about the same time (but from a different dealer), I also picked up a couple of imitation Transformers in clear plastic, recreating two classic cassette Transformers, Rumble and Buzzsaw. Like the custom Starscream above, these were not actually made by Hasbro, but still look pretty cool. Sadly, the backlighting effect is somewhat diminished by the stickers (which are still opaque) on parts of the body, so the effect is most pronounced at the extremities. 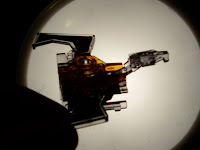 I actually have quite a few figures in clear plastic. In fact, some are several years old by now. And my collection of clear figures hasn't been limited to Transformers, either, but I think this is more than enough for one post. Perhaps I'll post pictures of some of the others next week.
Posted by Mark Baker-Wright at 7:10 AM