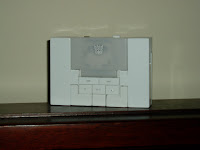 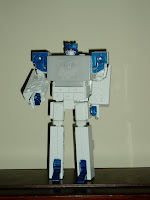 That's not to say that it's much of an MP3 player. You can't fast-forward or rewind within tracks, and tracks always play in the same order (the order in which you put the MP3 files on the miniSD card). You can, thankfully, pause, skip forwards or backwards to other tracks, and raise or lower the volume as desired. And, of course, you can transform the player into a robot!

Although there is a "Music Label" Soundwave available in Soundwave's traditional blue color scheme, you'll notice that mine is mostly white. This is intended to homage the original white color scheme of the iPod (although this is not a licensed iPod product, and iPod itself is now available in a rainbow of colors). My brother got a special deal by ordering both variations of "Music Label" Soundwave at the same time. He got the blue one, and I got the white one. Sadly, he tells me that his Soundwave no longer plays! It worked a couple of times, and then just stopped for no known reason. Has anyone else had this problem? I'm wondering if he's blown the small fuse inside, but can't imagine what he's done to blow it so quickly.

Anyway, if you're really into MP3 players, then I expect that this one wouldn't be for you. It's just too limited in its functionality, and you can get something else to do the same job for much cheaper. But since I haven't had an MP3 player of my own (my wife does have an iPod nano, but she uses it all the time, so that doesn't do much for me), I'm pretty glad to have it. It's given me a chance to listen to some speeches on youth work and a few TF Movie parodies (Yeah, yeah, these don't sound much like music, do they? What can I say? I'm just weird.) while driving to and from work, rather than settling for whatever NPR is playing. Also, I've ordered an MP3 CD of the TNIV, which I hope to use with this player to help in my devotional time. All in all, a pretty cool item for Transformers fans, but consider yourself warned. It's not for everyone.
Posted by Mark Baker-Wright at 9:00 AM