BotCon Dreadwind... Should Have Been Darkwing?

All five figures to be included in the BotCon 2007 box set have now been revealed. The latest, Dreadwind, is (as expected) a repaint of Classics Jetfire with a new head. What has surprised me most about this one is how many people seem to think that they should have used Dreadwind's former G1 Powermaster partner Darkwing, instead of this character, who admittedly looks a bit like a "Green Jetfire," rather than a totally new character (especially if you keep the Jetfire helmet on, as in the main picture at botcon.com).

But I still think FP made the right choice. Here are some comparisons.

First, the robot modes. The original Dreadwind is on the left, and the new BotCon version is on the right: 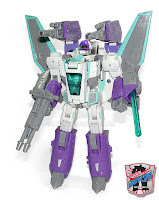 Now, here's the robot mode of Darkwing to the right.

Of course, one does have to do some imagination to get past the colors, which were purposefully chosen for Dreadwind, but I would argue that the robot modes are still a clear match for the two Dreadwind's, and a "non-match" for Darkwing. The cockpits on the chest are especially important here.

The point at which a lot of folks say "Aha! See?" is the fact that Darkwing has the "swing wings" that the BotCon mold has, which G1 Dreadwind does not. This is true. But other than that, I simply don't see enough significant differences in plane design between G1 Darkwing and G1 Dreadwind to consider one over the other. And given that the robot mode is a fairly clear match (and assuming that we're only talking about turning Classics Jetfire into one of these two characters. There are, of course, hundreds of other things they could have done), it seems to me that Dreadwind wins. I'd much rather have a close robot mode match than a vehicle mode match, especially when it's pretty close to begin with.

Of course, opinions are still bound to differ. I'm just happy that I'll be getting this toy. (Now if I can just figure out how to get that Alpha Trion that's been rumored! I've been wanting them to repaint Vector Prime into Alpha Trion for forever!)
Posted by Mark Baker-Wright at 8:00 AM