They say brevity is the soul of wit. Unfortunately, I've found that I simply cannot be as brief as I would like in my reflections on BotCon this past weekend. I had originally planned just to do one entry on this matter, and now I find that I can't even fit it all into a regular Monday-Wednesday-Friday week of posts! Ah, well. It's my blog, I can break my own rules if I want to!

Saturday night was the combined Casino night/dinner. Since the doors to this event didn't open until 7 pm, yet everything else was closed at 5 pm, my brother and I found ourselves with time on our hands. I expect that this gap was intended a) to allow Brian and the Fun Publications staff to finish getting all the preparations ready while not spreading themselves too thin, b) to allow convention attendees a chance to go up to their hotel rooms and change into dinner clothes (the dinner had a dress code forbidding t-shirts and shorts, although I did see a few people wearing such in line, and don't know if anyone was turned away). But my brother and I were commuting from Louisville, a little over an hour away, so we couldn't go back home during the break. We just had to stick around.

Perhaps that wasn't such a bad thing. By a little after 6 pm, we'd realized that a line was already starting to form outside the ballroom where the dinner was to be held, and decided that we had nothing to lose by taking our places in line. As it got closer to 7, the line was stretching all the way around the rather large mall area outside the ballroom. There were LOTS of people at this event. It's a little hard to imagine that FP wasn't prepared for so many, since anybody attending the dinner had to be pre-registered, but there were clearly more people coming than they had expected.

By the time we got inside, it was clear that there were tons of people trying to get to the food, although the buffets were set up so that there could be multiple lines (rather than just one or two for all items), which helped a bit. My brother and I just went to the very last buffet tables (those featuring salad and California rolls, which apparently few people wanted) and got some food there, expecting to come back later when the lines had died down. Brian had specifically said that the food would be replenished throughout the event.

After getting our food, we quickly found that there weren't anything remotely close to enough tables to sit at and eat, but we found a couple of chairs on the sides and ate there without tables. I was a bit confused when it came to the matter of drinks, as well. I didn't see the table on one end of the room for tea and water, seeing only a couple of tables on each end for bar drinks. I've never gotten into the habit of drinking alcohol, myself, but thinking this was the only option, I went up to one of the bars and asked for some grapefruit juice. I was given a very small glass and charged $2.00! Although I thought the price outrageous, I coughed it up, but didn't leave a tip in the glass jar set aside for that purpose. But not seeing the "free" beverages may be my own fault as much as anything.... 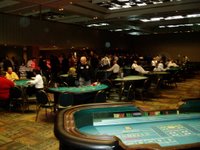 We finished our salads pretty quickly, and so decided to start playing games. Since most of the hordes had not yet gotten their food, there were very few people playing the games at that point, so we sat down at one of the blackjack tables and played a few hands by ourselves. Starting with 100 credits, we left with 110 credits, but no one had yet started awarding prizes at these tables.

Getting up to see what else was available (it was at this point that I finally discovered the water), we quickly found out that the bingo games were free! So we joined in and stayed there pretty much the rest of the evening. I got up one more time to try to spend some of my credits, but didn't win anything in the effort, and quickly rejoined my brother at bingo. I also tried to get some more food during one of the breaks between bingo games, but found that the buffet tables were mostly depleted. I got a little bit of fatty roast beef, but that was about it. My brother didn't find anything at all when he did a similar search a bit later. So much for "replenished throughout the event."

Bingo was pretty fun, although I felt that the person calling the numbers needed a sedative. I really hate it when they try to force enthusiasm by making everyone scream real loud between every game. Just call the numbers. If I win, I'll scream then. ;) (My brother did, in fact, win a Transformer by winning a bingo game) Having played the free bingo games for most of the evening, we ended up giving our now-practically-worthless credits to a couple of folks at the card tables with about 5 minutes left to spend them. If it did them any good, I'll be surprised, but glad to have been of service.

All in all, we were glad we went to the event, despite the obvious problems. Between my brother and I (I won a prize by having my number called during the raffle they called numbers for every half-hour), we won about $30 worth of free Transformers! We also got to be there for the live announcement that next year's BotCon would be in Providence, Rhode Island, the week before the new Transformers movie comes out (i.e., the either the end of June or the beginning of July, but definitely in the summer!). Happy, but exhausted, we left for home, and I caught a plane for Southern California the following day, my 2006 convention experience at an end.

I actually still have some overall comments on the convention, particularly in regard to the Dealer Room, but this is more than enough for readers to slog through in one sitting, so I'll deal with that tomorrow.
Posted by Mark Baker-Wright at 6:56 AM