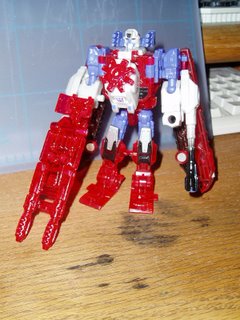 I'm pleased to announce the arrival of the 2006 Transformers Collectors' Club exclusive: Landquake. Like Skyfall from last year, this toy is a recolor using transparent plastics of a combiner toy from the Energon line of a couple of years ago. Landquake uses the same mold as Kickback and Blight (all Energon combiner molds were used twice, even in Energon). Frankly, I like this color scheme better. 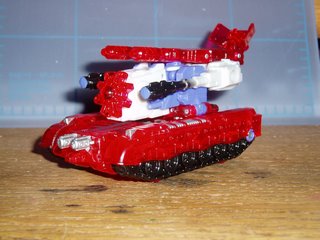 Unlike Skyfall, who is an Autobot, Landquake is a Decepticon (i.e. "one of the bad guys"). This is no doubt going to make for an interesting situation in a few years, as these exclusives, in addition to the 3 to come out over the next few years, are intended to combine into a larger robot. No combiner has ever intentionally consisted of members of opposing factions before. 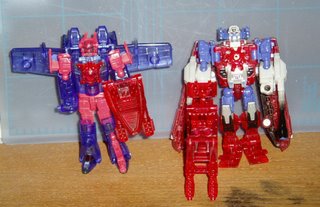 Landquake has not yet appeared in the club comic (even Skyfall's apparances up to now have been minimal), so the inevitable tension between these two Transformers destined to be allies despite being on opposite sides has yet to be demonstrated. One can only hope that the writers are up to the opportunity, and don't have Landquake "join up" with the good guys too quickly.
Posted by Mark Baker-Wright at 6:33 AM