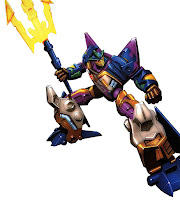 When creating exclusives for the official Transformer Club or for BotCon, the perennial challenge to longtime clubrunner Fun Publications was to create characters that would be of interest to fans, while acknowledging the limitations imposed by using existing molds and having only a limited budget to do remolds (usually in the form of remolded heads). This meant coming up with as many figures that didn't need remolded heads as possible. Needless to say, some of these attempts worked out better than others. In my own opinion, Timelines Depth Charge is an idea that shouldn't have worked, yet amazingly, it does!

Let's start with one of the main reasons why this idea "shouldn't" have worked. The original Depth Charge was a character from the later part of the Beast Wars line, and turned into a massive manta ray; an underwater creature. Timelines Depth Charge turns into a fighter jet. Usually, when a "beast" character is given a new "mechanical" form, there's a reasonably close analogy between the old alternate mode and the new one whenever possible. Birds might become jets, but land-based creatures usually become land-based vehicles. There's not a lot of precedent for either aquatic beasts nor aquatic vehicles, but taking a character with an aquatic beast mode and giving him an aerial vehicle mode is still something of a surprise. One could argue that a manta ray does have "wings" despite being an underwater creature, so I guess we can go with that....

Another potential strike against Timelines Depth Charge working as a new version of the Beast Wars character is the fact that the base mold for the Timelines version is Terradive, a "movieverse" figure (which I therefore have a predisposition to dislike). Not only was the original mold not created with Depth Charge in mind, but the movie aesthetic is so unlike anything else in Transformers that it should have made remapping to an other-universe character all-but impossible. Yet, with nothing more than the creative application of paint colors, the homage works amazingly well. In the images to the left, Beast Wars Depth Charge's head is on the left, and Timelines Depth Charge's head is on the right. Depth Charge's face got a bit thinner and more angular in the conversion to an all-mechanical form, but that's perfectly reasonable, it seems to me. 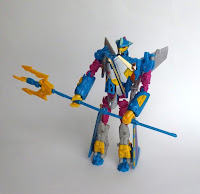 Transformation from jet to robot mode is quite intricate, and I would caution anyone unfamiliar with the mold against using excessive force, as there are several parts of this figure that are held together by only a small amount of plastic. That said, everything pegs together quite well, and the final robot mode is surprisingly stable. The trident is actually a feature of the original mold, which helps bridge the gap between aquatic and aerial themes and adds to the impression that this is indeed Depth Charge (even though the original Depth Charge wasn't known for wielding a trident), and resulting in one of the more popular figures of Fun Publications' tenure.

Timelines Depth Charge was created to be the club membership incentive figure for 2013, and thus was given to all members who had renewed their memberships by mid-March of that year. Like all such membership figures, Depth Charge arrived in mailboxes bagged within a plain-looking brown mailing box. However, because the BotCon for that year featured Beast Wars Depth Charge's voice actor, David Sobolov, as a guest, Fun Publications produced an additional quantity of figures to be sold in retail-style packaging. The idea was that convention attendees could purchase a package to be autographed by Sobolov, which I did, in fact, do. Thus, I actually have two Depth Charges, one which I keep within its original unopened package (something more than a little unusual for me, although this is standard for many collectors). The combined need to produce enough figures to ship to all members plus packaged versions for the convention means that Depth Charge had an official production run of 7000 figures, making it the highest production run known for any Fun Publications Transformers exclusive. While my understanding is that Depth Charge was a popular figure, this high production run nonetheless meant that there were a lot of figures still unsold when Fun Publications had to start clearancing their inventory after the club ended a couple of years ago. I imagine that you can find a specimen on eBay fairly inexpensively if you wish.
Posted by Mark Baker-Wright at 9:00 AM