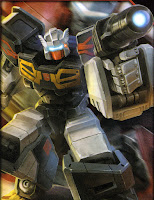 While I've never been a huge fan of the live-action Transformers films to come out in the past decade, they've provided both resources and inspiration for Transformers fans of all interests to get something that might appeal to them. For example, toys to come out in the various sub-brands of the Generations imprint (of which Titans Return is a recent example) have featured classic characters that might never have been seen again if the success of those movies hadn't provided Hasbro with funds that enabled them to take chances on some of the more obscure areas of the mythos. In return, certain creative corners of the fandom have come up with innovative ways to use some of those toys to make characters originally seen in the movies. The recent Titans Return version of Rewind provides an opportunity to have a look at both. 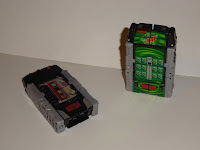 Titans Return Rewind, seen on the left in each picture, re-imagines the cassette from "Generation One" as a portable cassette player (with the cassette already plugged in, according to the pre-applied stickers which resemble Rewind's original cassette mode). The folks at Toyhax (formerly, and still better known as, Reprolabels) figured out that, simply by applying new stickers, they could create a convincing Mountain Dew vending machine, thus creating a new version of "Dispensor," a character created for the 2007 Transformers film.

A word about Dispensor is in order. Although the character was created as little more than a cameo non-toy character for that movie, he did not stay in that semi-unknown state for long. The owners of Mountain Dew, having paid for the cross-promotion, featured the character in an online game released at the time, and the novelty of a Transformer that turned into a common vending machine proved popular with fans, one of whom came up with the name "Dispensor" and suggested it to Hasbro executives at the 2007 BotCon. By the following year, the name was made official, finding use on a non-Transforming "Robot Heroes" figurine, and later still on a repainted movie-line toy (although this toy didn't actually turn into a vending machine, it did feature vending machine-like details on top so that, if you stood the toy's vehicle mode on its end, it could still pass for a vending machine if you ignored the truck cab at the top).

Both of the official Dispensor toys were fairly difficult to find at the time (especially the actual transforming toy, which was a Japanese exclusive), but being movie-line toys that retained the movie aesthetic of robots that look like they were made out of piles of knives, I confess that I never made much of an effort to claim them. This custom is far more attractive to me as a theoretical "G1 Dispensor."* The stickers were even designed in such a way as to take advantage of Titans Return Rewind's tank form (something that Rewind didn't have in G1, either, but which had already been associated with the character by means of a 2014 club exclusive) to give Dispensor an attractive third mode. 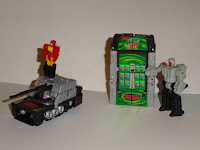 Titans Return Rewind was designed to provide interaction with the "Titan Master" robots (neo-Headmasters) that were the main focus of the Titans Return play pattern, but while this works reasonably well with Rewind, to have a Titan Master interact with Dispensor would only serve to highlight that vending machines aren't really the same size as tanks (not even small tanks, as Rewind would have to be if he were understood to be in-scale with the Titan Master seen here). I prefer to have Dispensor displayed with one of my third-party Targetmaster figures, which I believe to be a much better fit.

*If you actually prefer the movie aesthetic, and this more "G1-like" take on Dispensor isn't your ideal, the folks at "Prize Inside!" have created 3D-printed accessories to go with the Toyhax labels, including a more movie-like head and a distinctive "cola-can blaster," similar to the weapon used by the official Dispensor figures. You will need to paint these, yourself, of course.