Doctor Who and the Borg: Part Three of Ten 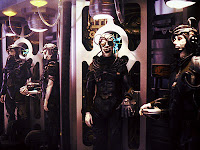 To go back and read Part Two, click here, or to go to the beginning, click here. Part Three begins after the jump.

Doctor Who and the Borg
by Mark Baker-Wright
Part Three

The TARDIS materialized on board the large cubical ship. The Doctor poked his head out, and glanced around.

"You stay here, K-9," the Doctor whispered. "I'm going to try to find out what these people are up to."

The Doctor then cautiously stepped outside of the TARDIS, and proceeded to walk through the mass of corridors that was the interior of the ship.

It wasn't long before the Doctor came upon one of the inhabitants of this strange vessel. The being was roughly humanoid, but much of his body was replaced by mechanical parts. Since the being was alone, the Doctor decided to approach him.

"Pardon me," the Doctor began, "I'm called the Doctor, and I was wondering if you could show me the way to whoever is in charge here."

The being paid no attention to the Doctor, and merely continued on its way down the corridor.

Unabashed by the lack of attention, the Doctor tried a different tactic. He walked to catch up with the being, and produced a small object from his pocket. "Would you like a jelly baby?"

Again, the being gave no response.

Finally giving up on the possibility of direct personal communication, the Doctor continued his search through the large ship. Eventually, he came upon a corridor filled with beings
like the first one he encountered, all apparently attached to the wall of the ship.

The Doctor approached one of the beings, and waved his hand in front of its face. "Hello! Anybody home!" Failing that, he tried another, and then another until, having determined that any further such attempt was clearly futile, the Doctor returned to the TARDIS.

When he arrived back at the TARDIS control room, he told K-9 about what he had seen. "They're not very interesting, K-9. No originality, no ambition, no sense of humor whatsoever, some just walk on as if they were in some sort of trance or something, but most just stand there against the wall. Arguably the most boring creatures I've ever encountered."

"Take us within communications range of the vessel and hail it, Commander."

"On screen." The screen revealed a hastily constructed spacecraft control center, with what appeared to be a young man in command. The apparent leader looked anxious. Frightened. Not unreasonable, the captain supposed, considering that the man's planet could well be being torn to shreds by this time. "I am Captain Jean-Luc Picard of the USS Enterprise representing the United Federation of Planets. We've come to offer assistance in your evacuation procedures."

"This is Commander Volon of the Dinarisis. I'm afraid you're too late, Captain," the young man began. "The Borg ship arrived just as we were leaving orbit." The commander paused a second. "We were the only ship to escape in time."

The captain considered the news with regret, if only they had been able to arrive sooner.... "How many people are aboard your vessel? Do they require medical aid?"

"We have about 2500 on board," the Dinar leader replied. "We were able to escape without conflict from the Borg... they seemed more interested in our planet. But our supplies are low... we were in a bit of a hurry."

The captain offered a slightly forced smile. "Then we offer our facilities to restock your supplies until you can reach Starbase 54."

"Thank you, Captain," Volon replied. "I will make the proper arrangements. Volon out." The viewscreen switched back to reveal the Dinar ship.

How terrible, the captain thought, that such a prosperous race could be reduced to so little in such a short time. And they were the lucky ones. Not every planet survived a Borg invasion as well as the Dinar did. The more the captain thought of the Borg's capacity for destruction, the more he feared their inevitable confrontation.