Doctor Who and the Borg: Part One of Ten 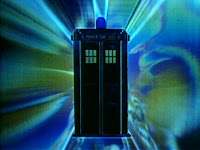 Last week, when IDW comics announced their upcoming Star Trek: The Next Generation/Doctor Who crossover, I was taken back in time.

You see, although the IDW press release proudly reports that this is "the first time ever" (their emphasis) that the two franchises have crossed over, that's only true in a strictly official sense. It is no doubt obvious that wherever there are fans, there is fan fiction, and fans have been trying their own efforts at a Star Trek/Doctor Who crossover for many years now.

More than 15 years ago, when I was still in college, I wrote my most ambitious piece of fan fiction to date, and although I have never shared it on this blog, the coming of the official IDW crossover tells me that now is the time to dust off that manuscript and make it public.

Like the announced IDW work, my work featured the Borg and the "Next Generation" Trek cast. However, that's probably where the similarities will end, since my work features no Cybermen, and a different Doctor.

That's all I'll give away right now, except to say that I've broken down my old manuscript into ten parts, which I will feature every day, Monday through Friday, for the next two weeks. I'll consider posting the entire thing on a separate, uninterrupted page, once I'm done, but for now, I like to think of this as a return to "Classic-style" Doctor Who, when stories had to unfold a little bit at a time, and when fans had to wait a little while between installments to ponder just how the hero would get out of the latest spot.

So, with that, let's begin:
Doctor Who and the Borg
by Mark Baker-Wright
Part One

Historian's note: This story takes place just after Dr. Who: The Invasion of Time (starring Tom Baker), and sometime after ST:TNG: I, Borg.

In space, the movement of a ship doesn't make any sound. You can't hear a spaceship coming.

If it weren't for Dinar VII's long-range sensors, then, there would have been no warning of the Borg's approach.

Not that it mattered.

Dinar VII was a planet on the very edge of Federation territory, but although they were not actually members of the Federation themselves, they had heard about the Borg: the race of inhuman, half-mechanical creatures who had nearly destroyed Earth just a couple of years ago.

The incident at Earth had proven that the Borg were not invincible, but the circumstances leading to that particular defeat were miraculous, and not repeatable.

Unlike the Federation, the Dinar had not had a citizen abducted by the Borg. They had not made a contact with its collective consciousness. They had no means of transmitting a similar shutdown signal, or even of telling the Borg to turn around.

Not that the Borg would have listened.

All that was left for the inhabitants of Dinar VII to do was to abandon their homeworld, while they were still able, and send a warning to the Federation:

The Borg had returned.


The Doctor labored in the TARDIS console room, completing the construction of the new K-9 Mark II. Having just left his homeworld of Gallifrey, where his previous robot-dog companion and chosen to stay behind with Leela, he was looking forward to a much needed vacation.

As the Doctor adjusted the last couple of wires and affixed the final silver plate back into place, he addressed the now-finished metal dog. "Well, K-9. How do you feel?"

Pausing for a moment to run an internal diagnostic, the computerized canine spoke in its artificially-produced monotone, "All systems functioning, Master."

"I don't know about you, K-9, but I feel like a vacation. How does 20th century Earth sound to you?" The Doctor began to input coordinates in the TARDIS console.

"The automobile, television, microwave ovens!" The Doctor interrupted. "Why, the twentieth century saw the first computers ever built! We could see your great-great-great grandfather, K-9!"

"I do not comprehend. Computers do not reproduce."

"Oh, never mind," The Doctor replied as he turned a few more dials on the console. "We're almost..." the TARDIS lurched forward with a terrific quake.

"We must be caught in some form of space-time vortex! We're being pulled off course! Hold on!" The Doctor held on to the TARDIS console desperately. In another minute, it was all over.

"Well, then." The Doctor straightened up. "Let's see if we can find out where we are." He turned on the TARDIS monitor. "This is strange." He wondered. "The monitor shows everything as it should be. There's the Andromeda cluster, Rigel, Betelgeuse, Sol. But the TARDIS says that our location is unknown." He continued to fiddle with the console controls. "Come on, now. Why won't the TARDIS give me some coordinates?"

Characters and concepts related to Doctor Who and Star Trek, and related marks, are trademarks of the BBC and CBS Studios Inc., respectively. This work of fan fiction is written purely for entertainment purposes, and is not to be used in trade of any kind.
Posted by Mark Baker-Wright at 12:00 AM