Doctor Who and the Borg: Part Seven of Ten 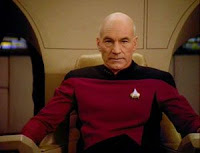 To go back and read Part Six, click here, or to go to the beginning, click here. Part Seven begins after the jump.

Doctor Who and the Borg
by Mark Baker-Wright
Part Seven

While the Doctor worked diligently with the library computer, an Enterprise security officer stood by his side, under orders from Lt. Worf to provide the Doctor with whatever assistance he might require. Another crewmember stopped by to update them on the ship's current situation, hiding from the Borg on the opposite side of the Dinar sun.

"So, if I'm understanding you properly," the Doctor asked, "the Borg have greater speed than your ship, they have much more powerful weaponry, and they can wait you out indefinitely while you will eventually have to leave the system in order to replenish your supplies?"

"That's about the size of it, sir," the crewmember acknowledged.

"What are the chances of reinforcements arriving before you would have to take a chance at escaping on your own?" the Doctor asked.

"Not too good, I'm afraid. And even if other ships can get here fast enough, we wouldn't even be able to approach the size of the fleet that a single Borg ship destroyed at Wolf 359."

"Well, I wouldn't worry too much about that," the Doctor grinned and tried to sound reassuring. "I find that the most important battles aren't won by military strength, anyway." He tapped his head a couple of times. "If you know what I mean."

The crewmember nodded politely, and then returned to his own duties, leaving the Doctor to return to his investigations on temporal disturbances that might explain why no one around him seemed to have more than a distant memory of two of the most persistent threats to universal tranquility that he'd ever opposed. He hadn't been able to determine much. Apparently, this race of humans had discovered time travel, unlike most humans that the Doctor had encountered in any era. However, time travel was now prohibited by what these people called "The Prime Directive," which forbade the interference of a more advanced culture on a more primitive one, a rule which apparently included their own ancestors.

Perhaps more relevant was the discovery that, in this culture's history, some evidence had shown the existence of other universes, and of the malleability of time. Apparently, some members of this very ship that the Doctor was on had accidentally made a trip into the 19th century, apparently saving the Earth from a race of aliens who were trying to drain the Earth of its psychic energy.

All this was very interesting, the Doctor thought, but what he really needed to know was how he had fallen into this alternate timeline, and how he could get back home.

The fact that someone on this timeline even remembered the Daleks and the Cybermen at all indicated that, at one point in time, these two timelines were, in fact, only one timeline. Some major
fracture in the space-time continuum must have occurred to split the timelines apart. But when did this event happen?

The Doctor stood up from his workstation, convinced that he had learned all he could by working on his own. He needed to get to a computer that had an account of history from his own timeline, so that he could compare the two records and look for discrepancies. For that, he asked the security officer assigned to return with him to the TARDIS.

While the officer waited outside for a moment, the Doctor stepped in and returned a moment later, followed by his robotic companion, K-9. While the three of them returned to the library workstation, the Doctor gave instructions.

"Now, K-9, here's what I want you to do. You are to communicate with this ship's computer and follow its records of Earth's history and compare them with your own. I need to find out when the two histories cease to be identical, and why."

Upon arriving at the workstation, K-9 extended the probe located between its computer eyes. "Communication established, Master. Processing request."

"Good boy, K-9, let me know when you find something. I'll be talking to the captain." With K-9 left to work on his task, the Doctor managed to reach the nearby turbolift and close the lift doors before the surprised security officer could stop him.


The USS Enterprise maintained its position opposite the Borg ship's side of the Dinar sun. Picard pondered the current situation. The sun's mass kept the Borg from being able to reach the Enterprise, but it also kept the Enterprise from being able to see clearly what the Borg were doing on the other side. Even so, it was obvious that the Borg would likely be waiting for the Enterprise if they tried to leave the safety of the star. They needed to have a plan that would increase their chances of survival, but Picard lacked confidence when dealing with this particular enemy. He kept second guessing every option that came to his mind. No, he kept telling himself. The Borg know me too well. They'll be ready for that....

The sound of turbolift doors broke the captain's concentration. That strange man who called himself the Doctor just walked right onto the bridge. Not only was he supposed to be accompanied by an escort at all times, but Picard had never allowed civilians to just walk onto the bridge at random, and this was a particularly tense moment.

Before the captain could voice his protest, the Doctor spoke. "Hello, still having problems with that cube thing?"

Picard forced himself to restrain his anger. "Doctor, we are in the middle of a combat situation. You don't just stroll onto the bridge anytime you feel like it."

"My apologies, Captain, but I have some questions for you."

"Now is not the time." the captain protested. "If you like, you can take up your concerns with Lt. Commander Data when he is not on duty."

"Excuse me, Captain," the Doctor became very serious, "but if you don't listen to me now, we might not survive this situation long enough for me to talk to Mr. Data."

"Very well." Picard decided to humor the Doctor. After all, he thought, there really wasn't anything else to do right now. "What do you need to know?"

"I've been giving some thought to your situation, and I think I may have a rather novel solution. According to your ship's computer, a little over half a century ago, a group of your ancestors used a star's gravity to send themselves backward in time. Couldn't a similar tactic be used to escape these Borg?"

"Time travel is forbidden by the Prime Directive," Picard responded.

"I'm not talking about changing history," the Doctor explained. "I'm merely offering a technique to escape the Borg. You need only travel a few seconds in either direction."

"I'm afraid I don't follow you. If we traveled through time only a few seconds, wouldn't the Borg still be there?"

"Basically, what I have in mind is a trap," the Doctor grinned. "We get them to follow us. If I read the information correctly, if calculations are off only by a little bit, they should be destroyed by the sun's gravity!"

"Yes," the captain considered the possibilities, "but the procedure could just as easily destroy us, as well."

"Oh, I don't think so!" the Doctor grinned. "Your ship seems to have one or two intelligent people aboard, and I'm pretty good at temporal mechanics, if I do say so myself."

Picard had to admit that the idea was one that he would never have considered on his own. It just might work. "Commander Data, will you begin the appropriate calculations?"