Doctor Who and the Borg: Part Five of Ten 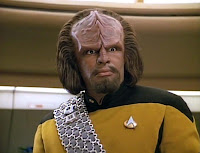 To go back and read Part Four, click here, or to go to the beginning, click here. Part Five begins after the jump.

Doctor Who and the Borg
by Mark Baker-Wright
Part Five

"On screen." Picard ordered, and the image on the screen changed to reveal a blue box floating in space.

Data was the first to speak up. "The object bears a resemblance to the police boxes used in England until the middle of the twentieth century."

Riker joined in. "But what would a twentieth century police box be doing out in this part of the galaxy?"

"Impossible to say without more information."

As Riker and Data considered the unlikelihood of a police box finding its way into the Dinar sector of the galaxy, the blue box vanished from the screen.

Worf rechecked his console. "Sensors have lost the object."

Riker found the information unacceptable. "But where did it go? Are there any signs of transporter activity?"

Data consulted the ship's computer. "Sensors show no indication of any transporter usage, nor any nearby objects from which a transporter signal might originate. It would appear that there is even more to the object than originally assumed."

Worf looked down at his console again. "I'm getting new readings, this time from inside the Enterprise. It appears that the object has reappeared on board. It is on deck 17."

"What can you tell me about the object? Is it dangerous?" Picard asked.

"Sensors seem to have trouble probing inside the object, but it does appear to contain one lifeform."

"Intruder alert!" Worf shouted, and red lights began to flash on the bridge.

"Belay that, Mr. Worf!" Picard countered, and with a touch of a console, the lighting on the Enterprise returned to normal. "Let's not jump to the conclusion that this lifeform, whatever it may be, is hostile. Send a security team down to investigate. Exercise caution, but don't harm whatever is inside that object unless absolutely necessary. The odds of finding any kind of spacecraft, as this object appears to be, so close to the Borg is unlikely to be a coincidence. It may have some information on them."

Worf tapped his communicator badge as he proceeded to the turbolift. "Worf to security. Have Markham and Delgado meet me on Deck 17. An unknown lifeform has boarded the ship." Picard and Worf exchanged an understanding nod as the turbolift doors closed.


The Doctor switched on the TARDIS monitor. "Well, K-9, it appears that we've arrived safely. Let's see what this ship looks like." He looked at the screen for a second. "Well-lit hallways, carpeting, definitely a more pleasant atmosphere. I wonder what this ship's crew is like." At that moment, a group of people wearing mustard-colored uniforms emerged from a nearby door. "Look, K-9, here come some people now. I think that it's time I introduced myself." With that, the Doctor exited through the TARDIS console room doors.

He emerged through the smaller opening of the TARDIS police box doors and greeted the newcomers. "Hello, I'm the Doctor, would you like a jelly baby?" The Doctor held a bag of the sweets in front of the group's dark skinned leader.

A large man with cranial ridges stared at the bag for a second. "What are you doing here?"

"Oh, well, I just saw your ship, and was hoping that you might know something about that large cube not far from here. Are you sure you don't want a jelly baby? They're very good." The Doctor reached into the bag, took out a jelly baby and ate it.

The apparent group leader remained motionless. "Then you have seen the Borg?"

"The Borg? Yes, I believe that's what they called themselves. Terribly boring people. Still, cutting up planets isn't something most creatures take too kindly too, wouldn't you say? Would any of the rest of you like a jelly baby?" The Doctor waved the bag from side to side.

No one touched the jelly babies. The leader simply said "You will come with me."

"What! Not even an introduction. I was really hoping that I would find more hospitable people on this ship."

The leader conferred briefly with the rest of his team, then turned to the Doctor. "I am Lt. Worf, head of security. Captain Picard would like to speak with you."