When we last discussed G.B. Blackrock, I wondered about the possible negative PR that Blackrock Enterprises might suffer as a result of its namesake having been an unwitting pawn in a scheme by the Decepticons to steal gasoline from human beings. We don't see G.B. Blackrock again until issue #68, when his company has apparently changed its name to Blackrock Industries, and is now based out of Washington, DC, rather than Portland, Oregon (given the change in locale, it is, of course, possible that this is a separate organization, but it's far more likely that new writer Simon Furman simply misremembered some details of Bob Budiansky's work, and a name change accompanied by a geographic move makes sense to me).

Having spent so much time in his previous appearances trying to convince those in authority to distinguish between Autobot and Decepticon, the US Government has finally been convinced (actually, Blackrock only specifically mentions "the Security Council," which would imply the United Nations) and have scrapped their own attempts to fight the Transformers—which really did cause more harm than good—asking Blackrock to step in with his own team that understands that not all Transformers are the enemies of humanity. 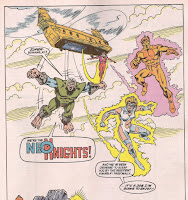 Thus, Blackrock becomes the Transformers-universe equivalent of Charles Xavier (well, he doesn't have super powers of his own, and he can still walk, but I digress...), assembling a team of humans with special powers (they're never called "Mutants" here) ready to fight the Decepticons. Fast-forward to a few issues later, when a Decepticon Civil War threatens to spill across the river into New York City, and the President (although not named, it is clearly then-incumbent George H.W. Bush) calls for Blackrock. The now-named "Neo-Knights" respond. 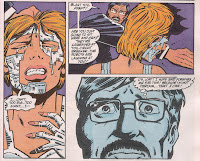 Before the battle can be completed, events taking place elsewhere in the universe intervene, and Blackrock and the Neo-Knights are transported (along with nearly every Transformer on Earth) to Cybertron, where they must quickly turn their attention to fighting Unicron. Ironically enough, it is the non-superpowered (to say nothing of human!) Blackrock himself who becomes a pivotal player in this battle, as he realizes that he must take drastic action to shock Circuit Breaker (who was recruited to the Neo-Knights despite her lingering problems distinguishing Autobot from Decepticon) into attacking the planet-devouring behemoth. While this gives Optimus Prime enough time to destroy Unicron with the Creation Matrix, Circuit Breaker is left in a catatonic state for the rest of the series. 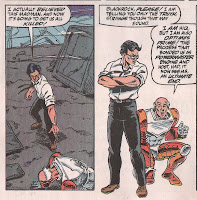 After the destruction of Unicron, Blackrock and the Neo-Knights are left stranded on Cybertron while the Transformers turn their attention to more pressing matters: the apparent self-destruction of Cybertron itself. Although the Transformers make preparations to evacuate the planet, the Nebulan Hi-Q (one-time Powermaster partner to the now-deceased Optimus Prime) convinces Blackrock and the others to stay behind to locate what Hi-Q calls "The Last Autobot." For a clue as to why Hi-Q was so convincing, check out the dialogue in the image to the right.

So the Last Autobot is found just in time for the end of the series. We don't actually see Blackrock in the last issue (unless you count a tiny uncolored image of him in a flashback), but a newly-resurrected Optimus Prime does pledge to return the humans to Earth, which I assume was done without further incident. When the new "ReGeneration One" series starts up in May, we'll finally have a chance to see what Blackrock has been up to in the years since returning home. I know I'm eagerly looking forward to it.
Posted by Mark Baker-Wright at 10:00 AM