Doctor Who and the Borg: Part Six of Ten 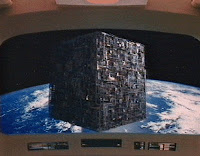 To go back and read Part Five, click here, or to go to the beginning, click here. Part Six begins after the jump.

Doctor Who and the Borg
by Mark Baker-Wright
Part Six

Captain Picard paced the floor of the bridge as the Enterprise approached Dinar VII. The Borg were well within sight now. Picard stared at the large cube on the screen. They appeared to have finished the consumption of the planet. It was only a matter of time now before the creatures decided to turn their attention on the Enterprise. Picard was at a loss for ideas. When he had been abducted by the Borg, his mind became a part of the Borg's collective consciousness. They knew everything that he did, including the tactics that had been planned against them. Only very quick and innovative thinking by Commander Riker had saved the Enterprise from being destroyed right then and there. Although Picard had been rescued from the Borg, and the Borg no longer had access to Picard's mind, any information he had at that point in time three years ago remained a part of Borg knowledge. As a result, any tactics that Picard thought of could very well prove useless. The Borg simply knew how Picard thought.

Picard's train of thought was broken when the turbolift doors opened to reveal Lt. Worf escorting a very unusual looking man. He was clothed in a very heavy tan overcoat with an enormous multicolored scarf wrapped several times around his neck. He wore a huge, toothy grin and had a head of incredibly curly black hair.

"Hello," the man greeted the captain and held out a small paper bag, "I'm the Doctor. Would you like a jelly baby?"

Picard seemed not to notice the bag. "I'm Captain Jean-Luc Picard of the Federation starship Enterprise. I was hoping that you might have some information on that ship out there."

"Yes, that's what your Lt. Worf said. I can't say that I know all that much, I really just ran into them. I've never seen such unlively creatures. Actually, I was hoping that you might be here to do something about them. When I arrived, those creatures were carving up a planet like a pot roast."

"Actually," the captain began, "that is why we're here. We've had a couple of encounters with the Borg in the past. Unfortunately, the Borg are known for being able to learn from their mistakes. Although we've defeated them once in the past, we won't be able to do so the same way again."

"Well, then, maybe I can help," the Doctor offered. "I've dealt with a number of computerized menaces in the past. These people can't be much worse than the Daleks or the Cybermen."

Picard looked confused. "Daleks? Cybermen? I'm not sure that I am familiar with those names."

Data turned around from his position at the front of the bridge. "The Doctor may refer to two groups that attacked Earth during the mid-twentieth century. Neither group has been seen since the 1970s."

Now it was the Doctor's turn to look confused. "That can't be!" the Doctor exclaimed. "The Cybermen tried to destroy the earth in 1986, so that the tenth planet of Mondas would survive. And the Daleks invaded and ruled Earth in 2167."

Data's expression remained unchanged. "Even assuming that you are participating in the common human misconception of the dwarf planet Pluto as a true planet, there has never been a tenth planet known in the Sol system, and neither of these incidents are in historical records."

"My, my," the Doctor muttered to himself. "Something strange is certainly going on here!"


The Borg were confused. The vessel that had been on board had disappeared, as if transported away by another vessel. The collective was familiar with transporters, and would generally have detected such a transfer of energy, yet there was no such apparent energy transfer, and at the time of the vessel's disappearance, no other vessel was in the vicinity. This might mean that the vessel represented something entirely new; a vessel capable of displacing itself under its own power. Had their attention had been turned to the task of assimilating the planet they now orbited, the Borg might have been prepared for this ability, as they might have noticed the vessel's presence on board their ship beforehand, but as it was, they might never even have known of the vessel's presence if something from inside the vessel had not made contact with their collective consciousness. Now it was gone.

A new vessel was now visible to Borg sensors. This one was a ship already familiar to the collective consciousness. Although it was not known to possess transporter technology capable of explaining the smaller vessel's disappearance, it was one of few ships ever known to escape assimilation, or destruction, at Borg hands. One of few failures.

Again, it did not matter. Failure was irrelevant. It would now be assimilated. Assimilation was inevitable.

The Borg ship began to move slowly towards the USS Enterprise.


Captain Picard sat in the command chair staring silently at the viewscreen as considered the recent course of events. The Borg ship just sat there. The Doctor hadn't had any new information. It seems that the strange man had recently met up with an anomaly that sent him off course and, coincidentally, right into the Borg's lap. After hearing that history did not follow what he was apparently familiar with, the Doctor asked to consult the ship's computer to find any information on... what had he called them? "Temporal disturbances?" Worf escorted the Doctor to the ship's library. Picard couldn't figure out what the Doctor wanted, but realized that there was much more to the eccentric little man than met the eye. He stared at the screen again. Still nothing. And then....

"Captain!" Data announced from the ops console. "The Borg ship is on an intercept course."

"Evasive action!" Picard ordered. Data tapped some instructions into his console, and the Enterprise moved away from the Borg ship.

"The Borg ship has changed course. It is still following us."

Riker stepped in. "Plot a course that will put the Dinar sun between us and the Borg, that may buy us some time."

But, for how long? Now the Enterprise was trapped. If they emerged from their position of temporary safety, the Borg ship would soon overtake them. Meanwhile, the relentless enemy could just wait indefinitely.

Picard needed a plan, and soon.