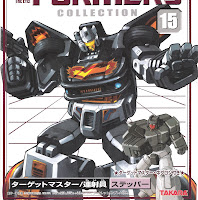 Although it is generally the case that the American and Japanese Transformers lines are roughly similar to each other, every now and again either we come out with a toy that they don't get, or they come out with a toy that we don't get. Following the human compulsion to want those things that we can't have, those of us on the "wrong" side of that equation will occasionally bend over backwards to get the toy available only to kids on the other side of the world.

In 1987, Takara released a couple of Targetmaster figures that weren't made available in the United States. One of these was called "Stepper." Stepper was a redeco of Jazz, with a little bit of retooling to accommodate a Targetmaster weapon. Stepper was considered so rare that prices for the figure on eBay would regularly go up well above $100 whenever a specimen showed up, which as late as the early 2000's wasn't very often. 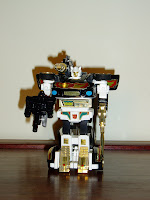 All that changed when the toy was rereleased in 2003 (some sources say 2004, but I do think 2003 is right). Not only did the new version ensure that the toy could once again be found comparatively easily via import outlets, but Hasbro also released a version in the United States. The Hasbro version was called "Ricochet," perhaps because Hasbro agreed with the ever-increasing number of fans who thought that "Stepper" was a pretty stupid name. My specimen is the Japanese reissue, which differs in a couple of significant ways from the 1987 original. Both differences are readily apparent in the picture to the right. At least, apparent to people that know about the original toy. 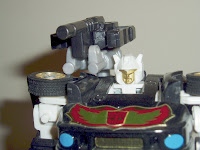 The first major difference is that the Targetmaster weapon (originally named Nebulon, but called Nightstick in the American release) was given a slight remold. The original version wouldn't actually fit in the larger figure's hands (which were, being originally designed for Jazz, never intended to hold a Targetmaster-type figure in the first place). Instead, Stepper was given an attachment which could be attached to the figure's back, where you see the missile launcher above. This enabled the Targetmaster weapon to be used as a shoulder-mounted weapon. However, this attachment came at the expense of the missile launcher, which wasn't included with the original Stepper (and, thus, is the second major difference between the original and the reissue). Since the reissue includes both attachments, you can choose where to place the Targetmaster weapon for display. 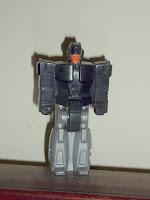 As with all Targetmasters, Nebulon/Nightstick can change from a weapon to a robot. As with Stepper/Ricochet himself, the weapon was given a name change for the American release. Part of the reason this was necessary for the weapon figure can be a bit awkward to describe, but here goes.... In America, Targetmasters (and Headmasters and Powermasters, too) have their origins on a planet called Nebulos. This world is occasionally called Nebulon in some continuities, but the name Nebulon is more commonly associated with a native of the planet Nebulos. At least, that's the way it is in the American cartoon (the American comic called the natives "Nebulans"). In any event, the Japanese continuity didn't use Nebulos at all, and so there was really no reason (so it would seem) for them not to use the name for the Targetmaster figure itself. 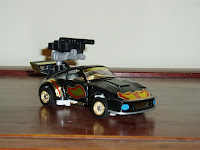 But the confusion doesn't stop with the American renaming of this figure as "Nightstick" in 2003. Nightstick was the name of Targetmaster Cyclonus' weapon, of which the Stepper/Ricochet weapon component is an exact copy. (NOTE: The www.tfu.info link above says that Cyclonus' Nightstick was recolored into Stepper's Nebulon. I'm just not seeing the difference, and don't think that the faction symbols seen in the photos there count.) My guess is that Hasbro probably won't do anything about this confusion when an all new Targetmaster Cyclonus is released next year.

To make matters even more confusing, Takara gave the name "Nightstick" to the other Targetmaster exclusive to Japan: Artfire, who still has never been reissued, probably because the reissue of Stepper/Ricochet didn't sell very well. All the hype that Stepper got when it was a "rare Japanese exclusive" died away when it became readily available (I still blame this at least in part on the high prices Toys R Us charged for Generaton One reissues. Why pay $30 or so for a toy when you could get better-engineered modern Transformers for a third of that price? By the time TRU started clearancing the figures to something reasonable, it was apparent that they were unpopular, having been on the shelves for so long, which further discouraged purchases). Artfire thus remains hard to find. 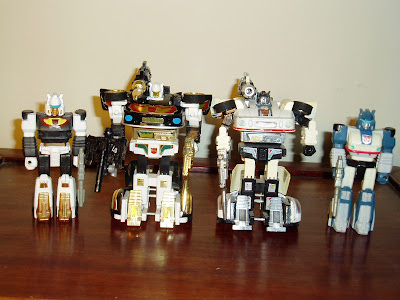