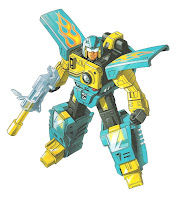 Transformers fans younger than the Generation One era probably scratch their heads a bit at why the character of Nightbeat is so popular. The original toy is fairly unremarkable even by Generation One standards, he never showed up in the cartoon, and the fact that he was a Headmaster was utterly ignored in his few US comic appearances (unless you count his "Transformers Universe" profile page). The UK comic did use Nightbeat's Headmaster partner, Muzzle, on one occasion, but that's pretty much it.

But those few appearances Nightbeat made in the comic books left an indelible impression on fans old enough to remember reading them back in the late 80's. Nightbeat was the Autobots' resident gumshoe. A detective along the lines of Philip Marlowe or Sam Spade, Nightbeat's first stories in the UK and US comic lines, "The Big Shutdown!" (UK) and "Bird of Prey!" (US) are themselves homages to The Big Sleep and The Maltese Falcon, respectively. Nightbeat has been fondly remembered ever since, and is a natural choice for a fan club exclusive. 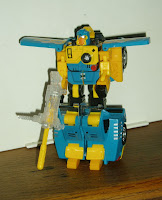 The club version of Nightbeat was created using the mold of Energon Hot Shot, giving it a new head. This new head is, itself, the victim of a bit of an unfortunate misunderstanding. The original Nightbeat wore a helmet with fairly distinctive "ears" created by attaching the vehicle-mode guns on either side (a feature Nightbeat held in common with all three Autobot Headmasters released in 1988). The new Nightbeat head was sculpted to include these "ears," as well, but when the toy was being created in the factory, someone there decided that the "ears" wouldn't allow the figure to transform properly, and so the decision was unilaterally made to remove them from the mold, and the club owners had little say in the matter (it is debatable whether or not the ears would have actually been such a problem as the factory decided, but there was nothing to be done about it). 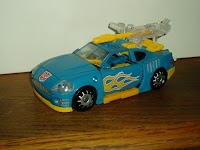 The club version of Nightbeat is unique among club exclusives released so far in that the toy was shipped with a comic book featuring the character. Entitled "Cheap Shots," we see Nightbeat and a few other Autobots (and several Nebulans, noteworthy for getting more characterization here than they ever did in the original Marvel comic despite most not actually being attached to their respective partners as Headmasters anymore) embroiled in yet another mystery. 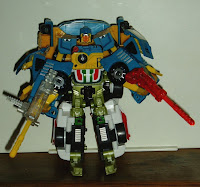 Using the same mold as Energon Hot Shot, Nightbeat has the ability to combine with other Energon Autobot molds, although this feature is not mentioned on any of Nightbeat's instructions. Here is an image of Nightbeat combined with Energon Downshift. I had to try out the feature just once "because I could," but to be honest, I'll probably never transform Nightbeat this way again. I'll just leave him in one of his canonical forms.
Posted by Mark Baker-Wright at 12:00 AM