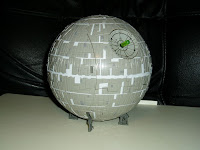 I've mentioned before that Hasbro decided a few years ago to release Transformers based on Star Wars vehicles and characters. The Star Wars universe has many readily identifiable spaceships, but perhaps none is more quickly recognized than the Death Star. In fact, Mimas, a moon circling the planet Saturn, so closely resembles the characteristic appearance of this legendary fictitious battle station that it is more often referred to (at least in non-scientific circles) as the "Death Star moon" than it is by its real name. (Note: the first close-up photographs of Mimas weren't taken until 1980, three years after the release of Star Wars to theaters, proving that the Death Star was not created with this resemblance in mind. Sometimes truth really is stranger than fiction!) 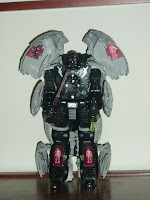 Generally speaking, Star Wars Transformers vehicles transform into a robot resembling the character most strongly associated with the vehicle. I have to assume that Hasbro didn't think enough kids cared about Grand Moff Tarkin (which didn't even see a regular action figure release in the original toy line of the '70s and '80s) to use him, since Darth Vader is used instead. Of course, being the largest toy made for this line, this should be no surprise. Hasbro would want to use the most important character they could, and Darth Vader arguably is the most important character in the whole Star Wars saga. Vader is definitely something of a "shellformer." That is to say, the robot is almost entirely concealed within panels that surround it in vehicle mode, these panels forming a "shell" that is pretty much the entirety of the vehicle itself. That said, at least this "planet-sized" Transformer is actually round! 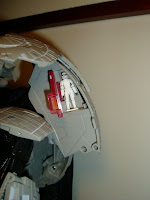 The Death Star/Darth Vader toy comes with Darth Vader's signature weapon, a lightsaber, which is made of transparent plastic so that when you put it in Vader's hand and press a button will be illuminated by a light from inside the hand. This light is accompanied by the unmistakable lightsaber sound effect. Less characteristic of Vader is the blaster he holds in his other hand, but since this weapon is essential to the presence of the planet-destroying superlaser (really a missile on the toy) in Death Star mode, this incongruity can perhaps be forgiven. The toy also has other light and sound effects, including several clips of Darth Vader's voice and the "breathing" sound he is known for. It was standard for Star Wars Transformers released prior to this year to include tiny "pilot" figures representing the actual humans of the franchise (in fact, this practice has really only been dropped within the past few months). In the case of the Death Star, the set comes with three Stormtrooper figures and one Darth Vader figure. These figures fit nicely in compartments at the large robot's shoulders and shins, but are almost certainly too large to be properly in scale with a station the movies clearly tell us is the size of a "small moon." 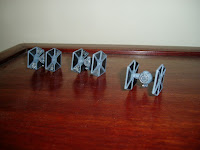 The Death Star/Darth Vader set also comes with three TIE Fighters that can either be assembled or taken apart and stored within another compartment in the back of the Death Star. Unfortunately, these tiny ships were designed with hexagonal pegs that don't quite line up like they're supposed to, making it impossible to assemble the TIE Fighters in their proper "tall" configuration. Plus, these ships are definitely too small to be in scale with the human figures mentioned above. Ahh, well, since when did scale mean anything in Transformers?
Posted by Mark Baker-Wright at 12:00 AM