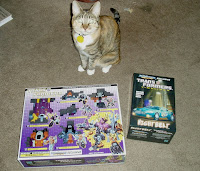 Exactly a week ago, I got my 2008 Official Transformers Collectors' Club exclusives in the mail. I'll deal with Nightbeat next week, since there's more than enough to talk about in regard to the Seacons alone. Indeed, I was tempted to break up this entry into multiple parts, but ultimately couldn't justify an organic way to do so without doing six separate listings, which would get more than a little monotonous over time. But first things first. A year ago this past March, when the first club exclusives arrived, I snapped a shot of the toys in their boxes modeled by my cat, Turtle. Such traditions must be maintained, so here's the ceremonial cat-shot. 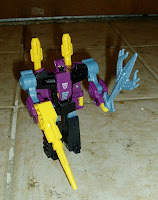 The Seacons are exclusives that started out (as with Astrotrain last year) as proposed exclusives for a retail chain, but when the retail chain decided that they didn't want to bother with the idea anymore, the proposal was left in limbo. Fans were told at a convention in 2004 that these toys would be coming out as part of the then-current Energon toy line, and fans have been clamoring for a club release ever since that promise fell through. Although this version of the Seacon team was expected in 2004, the molds date back to 1988, and so a history lesson on the nature of most Generation One combiners is in order. Back then, most combiners were designed in what has come to be called "Scramble City" style (so-named after the Japanese cartoon that featured this form of combiner). Each team consisted of one larger "leader" figure, which would invariably form the core of the combined robot, and several interchangeable "limb" figures. In the case of the Seacons, Snaptrap (pictured at the left) is the "larger 'leader' figure." 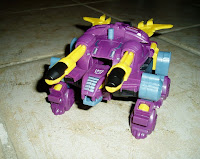 Snaptrap transforms from a robot to a robotic sea turtle. A particular feature of Snaptrap is the "pom-pom cannon." Basically, you can move that tab on top of Snaptrap's back to make the cannons move in-and-out repeatedly. A simplistic feature by modern standards, but pretty cool if you're a kid in the 1980's.

Most "Scramble City"-style combiner teams had five members: one leader and four "limbs." This makes sense. Humanoid creatures have two arms and two legs. Four limbs. So four is pretty much the right number of smaller "limb" robots. The Seacons were (and are) different. This team has six members. One leader and five smaller "limb" robots! From left to right, this is Overbite, Seawing, Skalor, Nautilator, and Tentakil.

There were a couple of non-"Scramble City" combiner teams that also had six members, but in these cases, there was no particular team member larger than the others, and so more than one robot was used to form the "core" of the combined form. That's not the case here. In true "Scramble City" fashion, Snaptrap clearly forms the core of the combined form, and the others each can turn into a limb, and limbs remain interchangeable (They also have an "attack mode" with weapons attached, as is also common for most "Scramble City" limb robots). So what's going on here? Does the combined form somehow have three arms or something?

It should come as no surprise, even to non-Transformers fans, that the answer to that question is "no." Instead, the designers of the Seacons decided to tap into then-current "Targetmaster" gimmick, and worked it out so each of the "limb" Seacons also turned into a weapon. (Obviously, the toys aren't in the same order this time. This is because I took this picture at a different time than I took the others, and didn't think to make sure the order remained the same. Sorry!) One of these weapons--whichever robot wasn't forming an arm or a leg--could now be held by the combined robot. 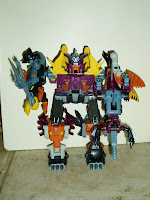 The combined form, Piranacon, is formed by combining Snaptrap with any four of the smaller figures and adding on a few extra parts (such as fists and footplates). It may be worth noting that, although the instructions do suggest a particular "default" for which smaller robots should form which limbs, all the images on the box the Seacons came in and the box artwork itself display a different variation (Skalor and Nautilator are swapped). I also found that I couldn't get the sword to point straight if I used it on the Seawing limb, so I further swapped the sword and Overbite-as-weapon around from what those images consider "correct." There are several other ways you can use the weapons, too (and these images don't even begin to do any limb-swapping!). 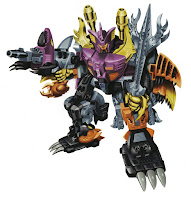 I do have a few small quibbles (I wish that the set included instructions for all of the individual components, instead of just instructions for Piranacon, but it's easy enough to find instruction scans at Botch's site), but I still recommend this figure quite strongly. The club just announced yesterday that there are less than 100 of the Seacon sets still available at the Official Transformers Collectors' Club Shop (of 1500 made available), so if you're on the fence about getting these, you'd do well not to wait any longer. If you're not a club member, you'll notice a "non-member" price, but don't let that fool you. It's just adding the cost of membership on to the cost of the figure, meaning that you not only would get this set, but all the other stuff that membership offers. If you live in the US (prices are demonstrably higher for folks who live overseas), I suggest considering it.