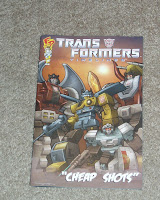 Last week, I mentioned that the club version of Nightbeat comes with a comic book. It's really great to have some official fiction to go with these toys. It's a major area that the club's been working on in the past year or so, and while I still think they have a ways to go, I want to give credit for the clear improvement that's taken place in this area. In fact, I enjoyed the story so much that it inspired me to pick up a G1 toy from eBay pretty much just because of the character's role in it. 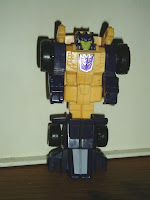 That toy is Ruckus. Ruckus is a Triggercon. For most of the Generation One era, there were lots of assorted teams that went by names that were contractions of "Autobot" or "Decepticon" and some other term, usually connected to the team's main gimmick. "Dinobot" for example, is an obvious contraction of "dinosaur" and "Autobot." This happened all the time in Generation One, but is done very rarely, if at all, in the modern era (and most of the more modern examples are homages to Generation One itself).

In the case of the Triggercons, the main gimmick was that each robot had weapons that would flip up when a button—a trigger—was pressed. There were "Triggerbots" on the other side that used the exact same gimmick. In fact, I'm unaware of any other gimmick that co-existed on both sides so precisely, so that "bots" and "cons" was the only difference between the two faction names. 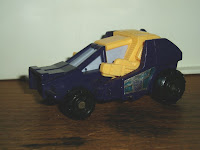 Anyway, I got my specimen of Ruckus fairly cheaply because its weapons don't actually hold in place very well, and the trigger button doesn't seem to do anything at all. I wasn't too worried about that, though. I'll play with Ruckus a bit, and then he'll go on display in robot mode, where I'll have the weapons deployed anyway.

In case you're interested in the comic that came with Nightbeat, but don't want to buy Nightbeat itself, the comic is available by itself at the club store, and costs the same regardless of whether you're a member or not.
Posted by Mark Baker-Wright at 12:00 AM