Issue #17 of the original Marvel Transformers comic was something of a milestone. It marked the first story set on Cybertron since the beginning of the series more than a year-and-a-half previously. This gave writer Bob Budiansky the opportunity to feature quite a few new characters (as he was always being pressured to do by Hasbro, who had this annoying habit of continuing to make more toys that they wanted to see featured in the comic) and do so all at once.

Perhaps surprisingly, Budiansky also went ahead and created a couple of new characters for which no toy existed at the time. Notable among these were Autobot spy Scrounge and Decepticon stronghold governor Straxus. The reason for creating new non-toy characters was so that Budiansky could kill the characters off without fear of toy-buyers (and perhaps the toy-makers as well!) who might complain that they just wasted money on a toy for a character that had already been eliminated from the story. Scrounge was killed off in that very issue, and Straxus was knocked off in the next (That didn't stop UK writer Simon Furman from using Straxus — shown to have somehow survived...or his head did, anyway — in subsequent UK-only issues).

Modern Transformers fans were thus overjoyed to discover that Hasbro was finally making a Straxus figure (although it is being sold under the name "Darkmount" for trademark reasons) in 2010. This gave me an opportunity to try something a little creative. The comic image above mostly features characters that been given new or reissued toys all within the past few years.  I decided to try to recreate this group shot with actual toys. I had to fudge a bit on the couple of exceptions to this "new toy" rule. No Scrounge toy has ever been created, but I still have the figure I got from "Crazy Steve" a few years ago, and I used a single generic MiniMate to represent the generic Transformers about to be killed by Straxus. I'm pretty pleased with how it finally turned out. I hope you agree. As with most images on this blog, you can click the image to get a larger version. 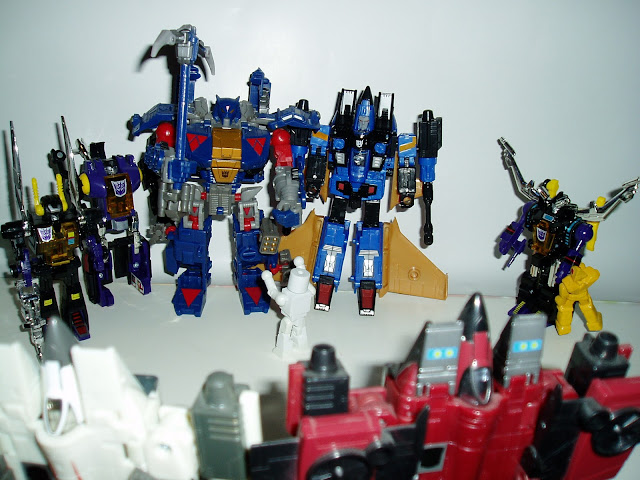